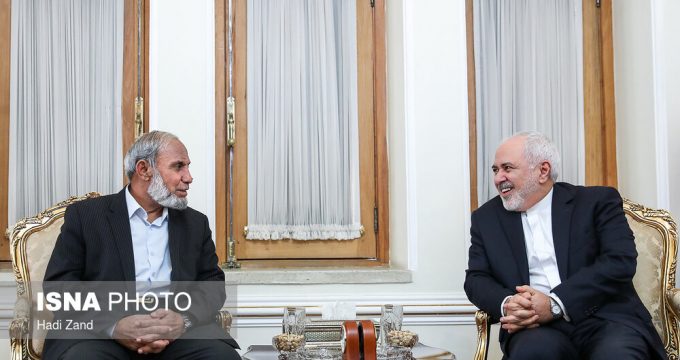 IRNA – Iranian Foreign Minister said supporting the cause of Palestine is one of the principled policies of the Islamic Republic of Iran.

Unfortunately, today confronting Resistance is taking place from inside the Islamic World, Mohammad Javad Zarif said in a meeting with Hamas leadership in the Gaza Strip Mahmoud al-Zahar.

During the meeting both sides discussed the latest developments in Palestine.

Zarif urged the Islamic World to stop enemies’ misusing of differences in the Islamic world on the issue of supporting Palestine.

Unfortunately, all countries and Islamic currents are under these pressures, he added.

He expressed hope that those Islamic governments that rely on Zionists and the US support one day return to Islam and know that Zionists are not trustable partners for anyone.

Zarif expressed regret over the decision made by Head of Palestinian National Authority Mahmoud Abbas to shut down the Palestinian Legislative Council (PLC), saying it is against democratic principles and will make Zionists misuse the situation.

He also underlined the importance of Palestinians’ unity under Resistance Axis.

Meanwhile, Mahmoud al-Zahar pointed to Iran’s real support for Palestine, saying Palestinians hope that the Zionists’ project will come to an end by the support of the Islamic World for the cause of Palestine.

Referring to PLC dissolution choice, he said Palestinian parliament has been selected legally and should finish its term.

He went on to say that based on Palestinian Constitution, Parliament cannot be dissolved even in emergency situation.