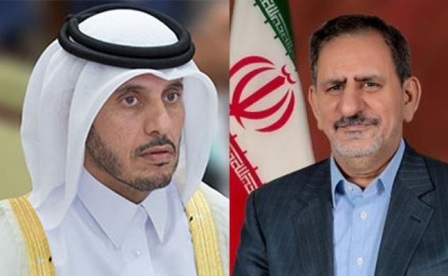 MNA – Iranian First Vice-President Es’hagh Jahangiri in a message to Qatari prime minister has called for expansion of relations between the two countries.

In a message addressed to Qatari Prime Minister and Minister of Interior Sheikhi Abdullah bin Nasser bin Khalifa Al Thani to congratulate the Qatari side on the country’s National Day, Iranian First Vice-President Es’hagh Jahangiri stressed the links and commonalities between the Iranian and Qatari governments, expressing hope that bilateral relations between Tehran and Doha would continue to develop, and peace and security would expand among Islamic and regional countries under cooperation of the two sides.

Qatar National Day is a national commemoration of Qatar’s unification in 1878. It is celebrated annually on 18 December.