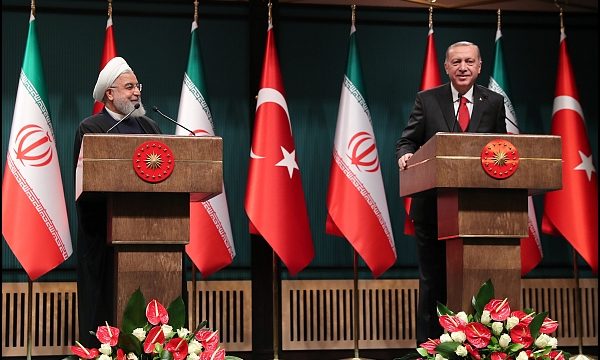 December 22, The Iran Project – Heading a high-profile delegation, Iranian President Hassan Rouhani arrived in Ankara on Wednesday evening (Dec. 19) to co-chair the fifth session of Iran-Turkey’s supreme council for strategic relations as well as conferring with his Turkish counterpart on regional developments.

Iran and Turkey have ramped up efforts in recent years to boost bilateral trade, setting a $30-billion annual trade target and signing several agreements to enhance cooperation in various areas.

After official reception by president of Turkey, Recep Tayyip Erdogan, on Thursday morning, the two presidents held bilateral talks behind closed doors without the presence of correspondents.

Afterwards, the 5th Session of the High Council of Iran-Turkey Strategic Relations has been held with the presence of Iranian and Turkish presidents.

The initiative for establishing the high council for Iran-Turkey strategic cooperation took form during Rouhani’s visit to Turkey back in 2014, during which the two presidents set a trade target at $30 billion.

Investment in a transit route

Addressing the 5th Meeting of the High Council for Iran-Turkey Strategic Cooperation, Rouhani stressed that the Islamic Republic of Iran is determined to deepen and develop relations with Turkey in economy, energy, transportation, tourism and science, saying, “Tehran welcomes development of relations between the two countries and more private sector cooperation”.

Referring to the transit potentials of the two countries, the president stated, “The capacities in this field are such that we can transform the East-West transit route with joint investment”.

He noted that connecting Iranian railways to Lake Van and creating diversification in rail lines with joint investment in developing bilateral trade relations between the two countries and the region was important and said, “Development of railways can be in the interests of two nations and peoples of the region”.

The Iranian president also hailed Turkey’s “firm” stance on unilateral US sanctions against the Islamic Republic.

Concerns over US’ sanctions on Iranian people

In a joint statement issued at the end of the event, the two presidents voiced concern over the consequences and impact of the US’ unilateral sanctions on life of people, cooperation, welfare and stability of the region.

Also, the two presidents emphasized taking all necessary measures to raise trade to the targeted tune of $30 billion through promoting required strategies.

Senior officials from the two countries signed the MoUs at a meeting attended by President Hassan Rouhani and his Turkish counterpart.

The documents entail cooperation between the two neighbors in the health and medical sector as well as communications and media.

Speaking in a joint press conference with his Turkish counterpart after signing of cooperation documents between the two countries, President Rouhani said, “Nobody and no power and no third country is able to harm the brotherly, neighbourly and close relations between Tehran and Ankara”.

He said, “During the Meeting of High Council for Iran-Turkey Strategic Cooperation, we made decisions for development of trade and economic relations”.

Stating that bilateral, regional and international topics were discussed in his bilateral meeting with the President of Turkey, he said, “Relations between the two countries are based on historical, cultural and religious relations, mutual interest, and development of peace and stability in the region”.

About Syrian crisis, Rouhani said at the presser: “The fate of Syria should be determined only by the people of Syria. Everyone should respect Syria’s territorial integrity and we (Iran and Turkey) completely agree on this.

Rouhani said Iran, Turkey and Russia will continue with the Astana negotiations on Syria’s future, with the next summit to be held in Russia. Iran and Russia have provided crucial military aid to Syrian President Bashar al-Assad, while Turkey supports the opposition.

In a meeting with business executives of Iran and Turkey, President Rouhani expressed Iran’s readiness to provide energy to Turkey in the long term, adding that facilitating banking ties paves the way for $30 billion bilateral trade target.

“We are able to turn sanctions into an opportunity for interweaving the economies of Iran and Turkey with proper management,” the Iranian president added.

“We should go towards free trade from preferential trade,” he continued saying “we are ready to support and provide the necessary conditions for the presence of Turkish investors in the Iranian energy market.”

Iranian Foreign Minister Mohammad Javad Zarif said that Tehran and Ankara are committed to cooperation in a bid to promote regional stability and security.

In a tweet, Zarif posted some photos of the 5th Meeting of High Council for Iran-Turkey Strategic Cooperation, and wrote:

“In Ankara along with senior Delegation headed by President Hassan Rouhani for 5th Meeting of High Council for Iran-Turkey Strategic Cooperation. As neighbors who have enjoyed 400 yrs of peace, we are committed to working together to promote security & stability in our region.”