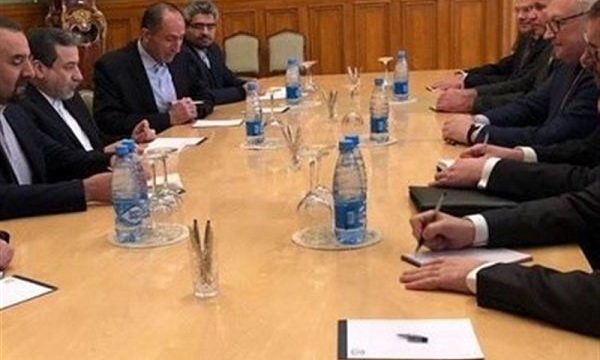 MNA – Iranian Deputy Foreign Minister for Political Affairs Seyyed Abbas Araghchi says that the global society has a duty to save and remain committed to Iran nuclear deal (JCPOA) in the face of US wrong policies.

Seyyed Abbas Araghchi, Iranian Deputy Foreign Minister for Political Affairs made the remarks in a Friday meeting with his Russian counterpart Sergey Ryabkov in Moscow.

Araghchi said that the global community is suffering from wrong policies of the United States and its allies, saying “unfortunately, as a result of the unilateral and illegal US approach and the contradictory decisions of the United Nations Security Council, the JCPOA is in a critical situation.”

The senior Iranian diplomat added that the JCPOA is an important security agreement towards which the whole members of the global society have a duty to preserve it.

Araghchi went on to express gratitude to Russia’s logical, firm and just stances on the JCPOA, saying “the JCPOA is a valuable diplomatic achievement, and the United States is undermining international diplomacy by trying to eliminate it.”

Sergey Ryabkov, for his part, said that Moscow spares no efforts to strengthen the positions of the Islamic Republic on the international stage and minimize the negative effects of Washington’s unusual sanctions against Tehran.

Ryabkov further noted that the Joint Comprehensive Plan of Action (JCPOA) has proven to be resistant against pressures, adding that Russia is pleased with its cooperation with Iran in the international arena, including on arms control, at the United Nations and within the framework of the Organization for the Prohibition of the Use of Chemical Weapons.