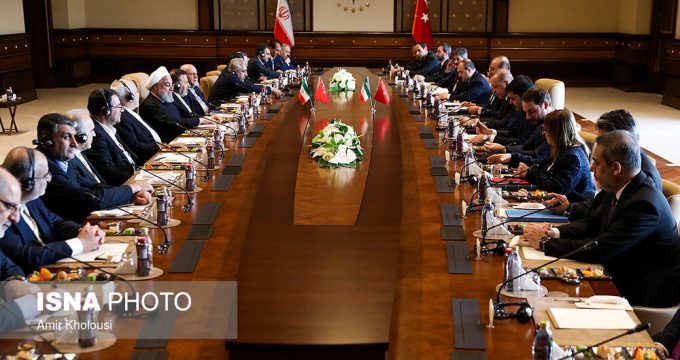 Iran, Turkey can invest in a transit route between East and West

President.ir – President stressed that the Islamic Republic of Iran is determined to deepen and develop relations with Turkey in economy, energy, transportation, tourism and science, saying, “Tehran welcomes development of relations between the two countries and more private sector cooperation”.

Speaking on Thursday evening at the 5th Meeting of the High Council for Iran-Turkey Strategic Cooperation, Dr Hassan Rouhani called for further efforts to realise the $30-billion trade target.

Referring to the transit potentials of the two countries, the president stated, “The capacities in this field are such that we can transform the East-West transit route with joint investment”.

Dr Rouhani said that connecting Iranian railways to Lake Van and creating diversification in rail lines with joint investment in developing bilateral trade relations between the two countries and the region was important and said, “Development of railways can be in the interests of two nations and peoples of the region”.

Dr Rouhani also emphasised the promotion of cultural and touristic relations between the two countries and said, “Closer ties between the two cities of Khoy and Konya can be achieved due to the presence of great poets such as Shams and Mowlana, who are the historic honours of the two nations and the entire region”.

The president also referred to the bilateral and tripartite cooperation between Iran and Turkey in the process of negotiations with Russia and said, “The talks have been successful and necessary and it is necessary for the process of stabilisation of security, return of refugees, preservation of territorial integrity, drafting of the constitution and the formation of a government to continue through the will of the people”.

The president also mentioned the hard conditions of the oppressed Yemeni people and the need to help establish lasting peace in the country, saying, “Turkey can play a role in the Yemeni-Yemeni negotiations and peace process and increase humanitarian assistance to Yemenis”.

The president also called for speeding up the formation of a customs route and said “We are determined to support the activities of the private sectors of the two countries and to resolve possible problems”.

Turkish President Recep Tayyip Erdoğan also referred to the holding of the 5th Meeting of High Council of Iran-Turkey Strategic Cooperation at a time when the United States has imposed sanctions against Iran.

He said, “In the past four meetings, good decisions were made to develop relations in different areas. Today, we are determined to implement preferential trade to enable all cooperation capacities”.

The Turkish president continued, “US actions and sanctions have had a negative and destructive impact on the foreign trade of the two countries, but we will minimise its consequences”.

“Iran, Turkey and Russia cooperation is an example of successful cooperation for sustainable peace in the region,” he added.