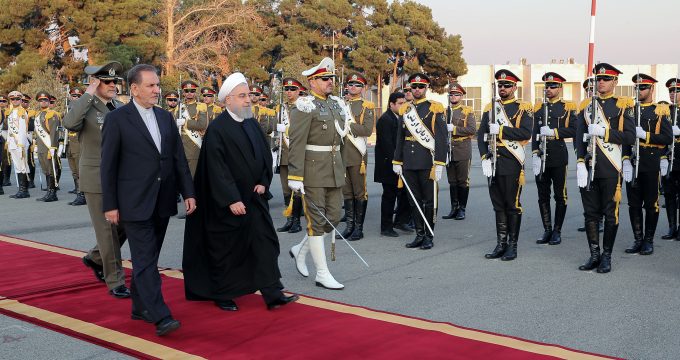 President.ir – President of the Islamic Republic of Iran left Tehran for Ankara, Turkey at the official invitation of the President of Turkey Recep Tayyip Erdoğan at the head of a high-ranking political and economic delegation.

President Hassan Rouhani was seen off at the airport by First Vice-President Dr Jahangiri and Advisor to the Supreme Leader in International Affairs Dr Velayati.

Having a bilateral meeting with Mr Erdoğan, attending the 5th Meeting of High Council for Iran-Turkey Strategic Cooperation, and discussing was to develop Tehran-Ankara relations in different fields and signing documents in political, economic and cultural fields are among the most important programmes of Dr Rouhani’s two-day visit to Turkey.

The council, the initiative of which was proposed by Dr Rouhani, is aimed at boosting relations and cooperation between the two countries to $30 billion.

The President is accompanied by his Chief of Staff Dr Vaezi, minsters of petroleum, industry, mine and trade, economic affairs and finance, energy, roads and urban development, CBI governor, and a number of vice-presidents, as well as heads of economic organisations and the representatives of the private sector.

Dr Rouhani will leave Ankara for Tehran late on Thursday.