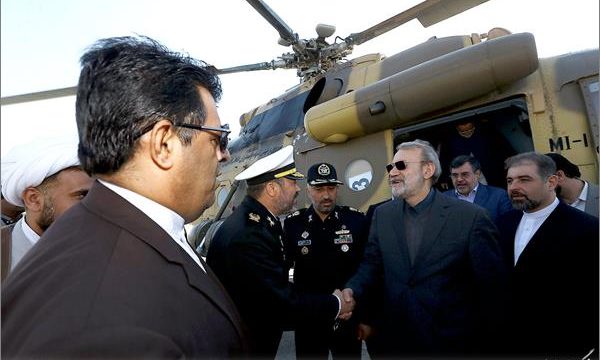 IRNA – The Speaker of Majlis (Iranian Parliament) said that paying due attention to the Makran region will change the country’s future and pave the way for progress.

Ali Larijani said on Wednesday in the city of Jask, Hormozgan Province, ‘Makran, in the eyes of the Supreme Leader and both in the policy making and in the Sixth Plan of Development, is among the strategic regions, which is a sign of the system’s forward planning for the country.’

The potentials of the region show the intelligence of those who have chosen it as a point of reliance for the progress of the country’s economy, he said.

The speaker of the Iranian Parliament stated, ‘Makran is a very important area for the country and there are concerns and ideas for the progress of the region that should be considered.’

Larijani said, ‘The presence of the army in Jask is a sign of the importance of the region; it is the jumping platform for the region’s economy and culture.”

Larijani added that great projects, such as the oil pipeline to the area, are underway as strategic goals and will be very profitable for the residents. The construction of the largest oil terminal in Jask and refineries will create many job opportunities.

He added, “With some other countries, I had talks to add to the volume of the investment in the area but of course there are good internal resources in this regard.’