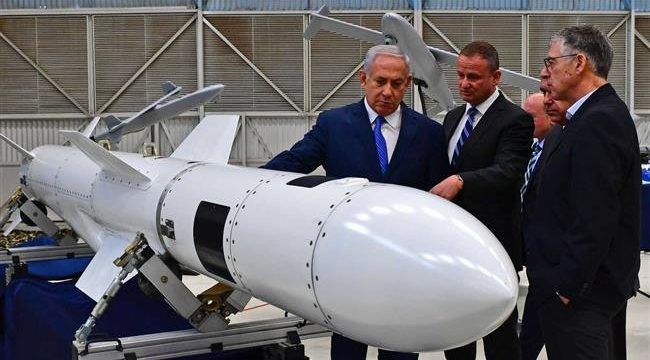 Press TV – Israeli Prime Minister Benjamin Netanyahu has boasted of the regime’s “offensive power,” saying Tel Aviv is developing missiles that can reach any target in the Middle East region.

“They develop offensive missiles here that can reach any place in the region and any target,” Netanyahu said during a visit to Israel Aerospace Industries (IAI) outside of Tel Aviv, on Monday.

The regime, he added, is working on weapons systems with “special capabilities that no other country has.”

“This is the offensive power of Israel which is very important for us in all sectors,” added Netanyahu, who also serves as Israel’s minister of military affairs following the November 14 resignation of Avigdor Lieberman.

Lieberman’ resignation came in the wake of an Israeli commando raid and a spate of deadly airstrikes against the besieged Gaza Strip, which triggered retaliatory rocket attacks by Palestinian resistance groups into the southern parts of the occupied territories.

Lieberman stepped down from his post after Netanyahu bypassed him and accepted a ceasefire with Gaza-based resistance factions. Analysts described the developments as a sign of Israel’s defeat both on the battlefield and the diplomatic front.

The loss of Lieberman’s five parliamentary seats destabilized Netanyahu’s majority coalition, forcing the premier to take over the empty office himself to avoid early elections.

Despite protests from opposition lawmakers, the parliament on Monday confirmed Netanyahu as the permanent minister of military affairs.

“Israel can’t allow itself to keep him as” minister of military affairs, Yesh Atid party leader Yair Lapid said, adding that Netanyahu had failed to contain a wave of violence in the occupied Palestinian territories during his first month in the post.

Besides serving as prime minister, Netanyahu is currently also the foreign minister, health minister and immigration and absorption minister.

Last week, Netanyahu told his cabinet that he planned to appoint someone else as immigration and absorption minister this week and another as foreign minister within a month.

Since its creation in 1948 on occupied Palestinian land, the Israeli regime has waged numerous wars in the Middle East, the latest of which killed around 2,200 Palestinians in the besieged Gaza Strip in 2014.

The regime has in recent months stepped up threats of a new war against Lebanon. In a highly provocative move, it recently launched an operation on the Lebanese border against what it calls “attack tunnels” dug by the country’s Hezbollah resistance movement.

Tel Aviv also carries out airstrikes against Syrian soil from time to time in support of the Takfiri terror groups fighting the Damascus government.

Earlier this month, the hawkish prime minister said Israel was prepared to launch attacks inside Iran if its survival was at stake. He even threatened a nuclear attack against the Islamic Republic in August.