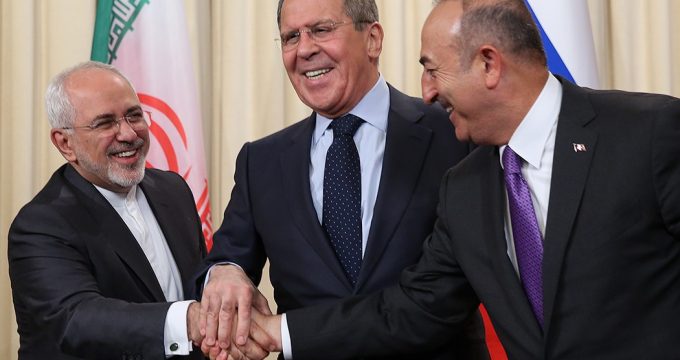 Joint statement by Iran, Russia, Turkey on Syria in Geneva

MNA – The Ministers of Foreign Affairs of the Islamic Republic of Iran, the Russian Federation and the Republic of Turkey as guarantors of the Astana format held the trilateral meeting and consultations with the UN Secretary-General’s Special Envoy on Syria Staffan de Mistura in Geneva on 18 December 2018.

1. presented the positive results of their consultations with the Syrian parties on the composition of the Constitutional Committee;

2. reaffirmed their determination to facilitate the beginning of the Constitutional Committee’s work, inter alia by elaborating its general guiding principles through interaction with the Syrian parties and the UN Secretary-General’s Special Envoy on Syria, on the basis of which the rules of procedure that will ensure its efficient and sustainable work will be determined. The work of the Constitutional Committee should be governed by a sense of compromise and constructive engagement aimed at reaching general agreement of its members which would enable the outcome to receive the widest possible support by the Syrian people;

3. agreed to take efforts aimed at convening the first session of the Constitutional Committee in Geneva early next year;

4. expressed their conviction that these steps will lead to the launch of a viable and lasting Syrian-led, Syrian-owned and UN-facilitated political process in line with the decisions of the Syrian National Dialogue Congress in Sochi and the UN Security Council resolution 2254;

5. reaffirmed their strong commitment to the sovereignty, independence, unity and territorial integrity of the Syrian Arab Republic and emphasized that these principles should be respected by all sides.