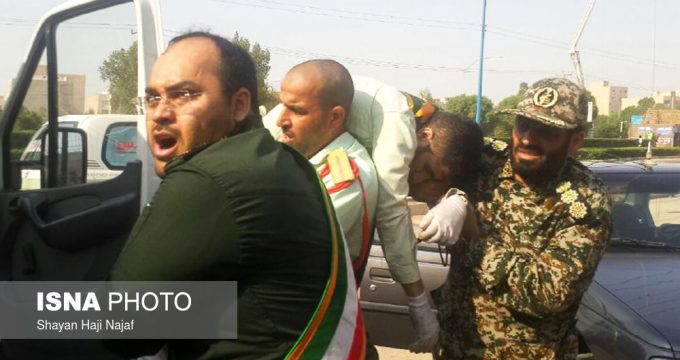 IRNA – The families of the victims of terror attacks in Iran in a letter filed protest against Danish government for supporting terrorist groups.

In their letter to Denmark’s envoy to Tehran which was released by Habilian website on Tuesday, Iranians said ‘terrorism knows neither ideology nor geography.’

The full text of the letter is as follows:

The Embassy of Denmark,

On behalf of families of Iranian victims of terrorism, we are writing to you on the occasion of the dreadful terrorist attack in Ahvaz on September 22, 2018, which led to the death and injury of nearly 100 Iranian citizens.

Since the victory of the Iranian Revolution in 1979, our country has been a victim of high volume of subversive acts and terrorist operations in which more than 17,000 citizens have been killed and thousands of others have faced permanent injury, in addition to the destruction of the country’s infrastructure.

With the government’s all-round combat with terrorist groups in the early years after the Revolution, part of them were destroyed and another part were weakened. So, with the support from some regional and Western governments, these groups began relocation of their headquarters to those counties and from there, they started planning to commit terrorist operations in our country; an action that unfortunately still continues.

Among the European countries that put their territories at the disposal of these violent and terrorist groups, Denmark is also existed.

Unfortunately, your country has a bad record in harboring Iranian terrorists, dating back to a few decades ago when you sheltered the Mojahedin-e Khalq Organization (MKO, a.k.a MEK, NCRI, PMOI, etc.), a group that was designated as a terrorist organization by some Western countries and the European Union. To this, one could add the hosting of Khuzestan’s separatist groups.

In addition to separatist acts, these criminal groups have also carried out massive terrorist operations; a measure that further clarifies the depth of the catastrophe of Copenhagen’s support for them.

The attack on the Iranian Embassy in London and the hostage taking of embassy staff; bombings in Ahvaz, Abadan and Dezful Governorates; bombings in Ahvaz’s Management and Planning Organization; bombings in Housing and Urban Development Organization of ; bombing Sugarcane Development Company of Khuzestan; Explosion of Abadan oil pipelines; bombing of the Khuzestan Natural Resources Directorate; bombing in Naderi avenue of Ahvaz; bombing of Saman Bank, Kian Pars district of Ahvaz; and armed attack on the tourist buses in Khouzestan province named ‘Rahyane Noor’, are parts of the terrorist crimes of separatist groups living in Denmark such as the ‘ Harakat al-Nazal al-Arabi li-Tahrir al-Ahwaz’.

To these you should add meetings and planning measures for sabotage and assassination inside Iran, the last of which, till this moment, has been the above-mentioned terrorist attack in Ahvaz on September 22, 2018, which these groups have claimed responsibility for.

Clearly without the Danish support for these groups, they could never freely operate and engage in planning terrorist and subversive acts. Therefore, this is the right of families of people who have fallen victim to the terror attacks and violence carried out by these groups, to point the finger at the Danish government.

Regardless of the terrorist history of these groups, your country has put its territory at the disposal of them; an issue that implies Denmark’s support for their actions in the killing of hundreds of Iranian citizens.

Our question to you is that if the terrorist attack on the parade of the armed forces of Iran on September 22 was carried out against the citizens of your country, what kind of actions would you put into your agenda? Would you still deal with the elements of that terrorist group with negligence? Basically, what types of actions would your government put on its agenda? Public opinion in Iran is looking forward to hearing your answer.

Families of victims of terror attacks committed by terrorist groups residing in Denmark, especially the survivors of the recent incident in Ahvaz, with the help of a number of lawyers, have filed lawsuits against the perpetrators of the incident, and the relating judicial process will begin shortly.

The Iranian people have always sympathized with European citizens in all the terrorist incidents that have taken place in Europe by extremist terrorist nodes in recent years and have condemned terrorism anywhere in the world to anyone. Mutually, they expect your government to respond to this sympathy with the flower branch, not with the support of the terrorists.

In the end, we would like to remind you that the failure of the European countries to deal seriously with the ISIS terrorists has led to a large number of terrorist operations in European cities. Terrorism knows neither ideology nor geography. The terrorists who attack innocent people with their psychological problems have the capability to use them anywhere in the world. Therefore, we recommend that you learn from the experience of ISIS operations in Europe and prevent these terror groups from operating in your country.