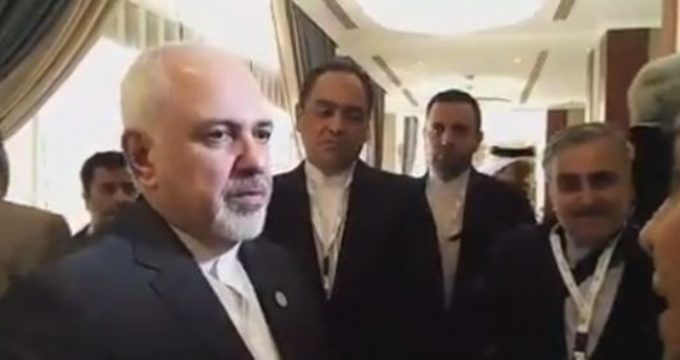 IRNA – Iranian Foreign Minister Mohammad Javad Zarif referred to US withdrawal from Iran deal, and said the US is in no position to talk about the UNSC Resolution 2231.

Zarif made the remarks Saturday in an interview with Qatari media ‘Aljezeera’ which was held on the sidelines of Doha Forum 2018.

In response to a question concerning the US claims on Iran missile tests, Zarif said ‘first Iran’s missiles are defensive, we need them for deterrence, we use far less for military and anybody else in the region and that is why we have said from the beginning that our missiles are not negotiable.’

‘The second point is that the United States is in clear violation of 2231 of the Security Council resolution by withdrawing from the JCPOA so it puts them in no position to talk about that resolution because they have tried to destroy the resolution, the resolution stands in spite of them not because of them,’ he added.

‘The third point is the resolution is very clear it does not prohibit Iran from testing missiles it refers to missiles that are designed to be capable of carrying nuclear warheads and JCPOA and Resolution 2231 verify that Iran does not seek nuclear weapons and therefore we will not have any nuclear warheads for which we designed missiles that means that the missiles that we are testing won’t come within the purview of the request not the demand of the Security Council in 2231 the Americans are thinking in the past they are talking about the resolution that is defunct they are talking about a resolution that was replaced by resolution 2231 and they attempt to revive that resolution by violating another resolution we never seek it,’ he reiterated.

‘The United States has done its best to undermine it to destroy it but the rest of the world don’t seem to be prepared simply accept US bully,’ he added.