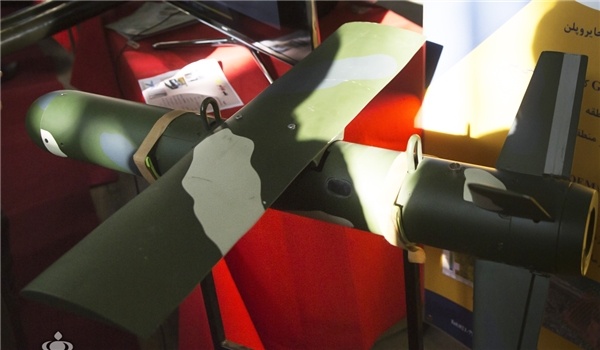 The glide bombs lack any booster and engine and hit the target with the help of their aerodynamic shape and gravity and without any need to propulsion power.

Jamarat, with a radius of 125mm, weighs 15kg and is one meter long.

It can be mounded on different types of flying objects, including helicopters, drones and giro planes. It is dropped over from an altitude of 500 meters and has a maximum range of 6km.

Jamarat which enjoys a GPS/AHRS system and a video seeker and hits the target with less than 10 meters of margin of error has gone under successful tests by Islamic Revolution Guards Corps (IRGC) giro planes.

Iran has taken long strides in production of different defense equipment, including bombs, missiles and drones, despite the US sanctions.

“Following a proposal by the Aerospace Force of the Islamic Revolution Guards Corps (IRGC), Iran’s Defense Industries Organization manufactured a 10-ton bomb; these bombs are at our disposal and can be launched from Ilyushin aircraft and they are highly destructive,” General Hajizadeh said in a televised interview.

The commander pointed to the ordnance as Iran’s “father of all bombs” as compared with the GBU-43/B Massive Ordnance Air Blast Bomb (MOAB), also known as the “mother of all bombs,” which the US Air Force dropped on tunnels in Afghanistan’s Nangarhar province from an MC-130 aircraft in April.

The MOAB weighs about 22,000 pounds (9,800 kg), and was said to be the most powerful non-nuclear weapon ever designed. It was developed during the US war on Iraq and is intended to target large below-surface areas.