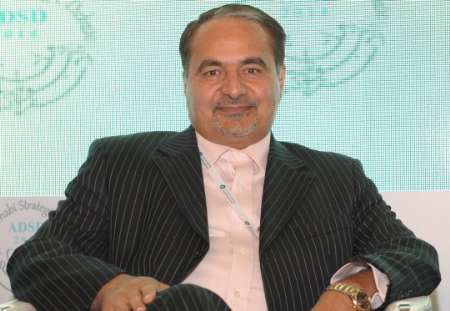 US after toppling, EU not capable of holding talks with Iran

IRNA – Iran’s ex-diplomat and former nuclear negotiator Hossein Mousavian referred to Iran’s capacity for holding talks with the European Union, and said the EU should get permit from the US.

‘Iran has political will and has capacity to engage with Europe on broad issues. But even if the Europeans have the political will they do not have the capacity,’ Mousavian said addressing a panel which was held with the attendance of Cornelius Adebahr, German Political Analyst and entrepreneur.

‘If the EU is going to engage with Iran on regional issues like Yemen, Syria, Iraq, the ISIS and terrorism I promise you that Iran would be ready to shake hands, but Europeans need to get permission from the US and the US is not going to give permission,’ he added.

‘This is the reality, why you are blaming Iran on regional dialogue its your weakness,’ he reiterated.

‘However, let’s mention two experiences we had after the nuclear deal on regional issues before the nuclear deal Americans, Saudis said Iran should not be invited to international negotiations on Syria.’

‘In 2015 July the deal was agreed and John Kerry invested a lot to convince that Iran should be invited.’

‘If you look at the history of the international Syrian negotiations, you would see that only once there has been a very comprehensive agreement about the principles to resolve the Syrian crisis and this is October 2015 when Iran attended,’ he noted.

In response to another question as regard Iran’s approach toward Iran nuclear deal, he said ‘the nuclear deal created a hope that there would be possible approach between Iran and the world powers on the regional issues’.

‘The second during president Ahmadinejad the Iranian side offered EU3+3 to discuss other regional disputes but Americans and Europeans were insisting on only nuclear negotiations and the third even during president Rouhani Iran at very high level publicly announced if there is a deal if the US would comply precisely, Iran would be ready to negotiate on other disputed or regional issues and all three have practically failed and I believe none of these three you can blame Iran if you want to blame you should blame Europe and the US because Iranians have fully complied with every commitments within the deal.’

‘In 2013, 2014, 2015 there was a great hope on the Iranian population not because the deal on non-proliferation is reached but perhaps there would be a greater approach between Iran and the West and the Iranian foreign policy would be normalized then Iran would have advantages and development in technology, foreign investment, Iranian ex-diplomat said.

‘But important issue is that [Iranian] people are not blaming their own authorities or government because everyone in Iran know that Iran has fully implemented the deal and the problem is with the Western side for there is nothing to blame the Iranian government and authorities,’ he added.

‘If you read the Iranian papers since 2003, you would see that the nuclear issue has been the most important foreign policy issue during 15 years in Iran before and after the deal.’

‘We have had always very powerful opponents to negotiations with the US and world powers, because the opponents have been insisting that you cannot trust the US.’

‘If you read the Iranian Supreme Leader’s statements during 2012-2017, at least monthly he has been reiterating that you cannot trust the US and before the deal he was saying if there is a deal, the US would violate and after the deal he said the same. Therefore not opponents have something very legitimate and very reasonable to argue.’

‘Otherwise I think we have declined after President Trump withdrawal from the nuclear deal on economic indicators,’ he said referring to negative consequences of the US walkaway from JCPOA.

‘I mean the inflation during President Ahmadinejad was 40% and after the deal it came down to 10% and after President Trump withdrawal again the figure was 38% therefore you can imagine how the domestic economic situation.’

‘Nevertheless I should say 50% of the Iranian economic problems are because of the sanctions, US, JCPOA at least 50% is because the dysfunction of Iranian economic institution in the country.’

‘It is at least 50% domestic problems whether it is corruption or banking system, regulation,’ Mousavian noted.

‘I agree that the Europeans have done really their best after Iraq-Iran war in order to engage with Iran in diplomacy and to prevent US-Iran military confrontation and this has been the European constant strategy. Because I have been involved in Iran-Europe relations from 1986.’

‘During the critical dialogue this was the reason to push back the US for possible military strike during the nuclear crisis in 2003.’

‘We really need to appreciate the EU foreign policy which is more based on diplomacy rather than American policy which is based on bullying but at the same time after the deal when you mentioned billions of contracts or big companies came to Iran.’

‘To be fair, Europeans lifted the sanctions and Iran-Europe economic relations increased 30-50 percent.’

‘I think Europeans share before the nuclear deal in Iranian trade and economy was 15% but after the deal it decreased to 30-35 percent.’

‘However none of the big banks were ready to exchange one dollar with Iran even after the nuclear deal and even before President Trump withdrawal.’

‘Only small banks, neither Deutsche Bank nor Commerce Bank, none of the big European banks.’

‘The European big companies signed 40-50 billions agreements but 90% was on paper and they signed and finalized and they wait for the final decision of the US to see whether they would be punished or not.’

‘After President Trump withdrawal, again I appreciate the fact that Europe has kept its good political intentions to preserve the deal, but economic benefits of Iran, Europe has been practically able to do anything and promises are more on words and papers.’

‘We have almost zero on practice,’ he reiterated.

Elaborating on Iranian President Hassan Rouhani’s recent address naming the Zionist regime of Israel as cancerous tumor, Mousavian said ‘I think if Israel has so much influence in the US and Europe, you should not blame Iran.’

‘Netanyahu is making the same rhetoric threatening Iran every week, but there is no news here, nobody cares neither here nor in the US,’ he added.

‘He says Iran should be dismantled, we have to bring regime change in Iran, the US should attack Iran, but nobody cares but if Iran says something even less here is like a nuclear bomb and it is the same if anyone is going to have a judgment about the Iranian rhetoric or statement you have to look at the Israeli statement and Iranians are responding however definitely as much as pressures, sanctions increase, the Iranian radical policies would increase it is the equation it is not new.’

‘Iran has been more ready to engage in dialogue, cooperation when there is less pressure, sanctions and respectful language but when the bullying language threatening language, sanctions, threatening Iran will get more radical in order to show their identity, integrity and independence.

To show that they are a very powerful nation and they would resist and they are not going to capitulate.’

‘For example President Trump said two or three times during the last two or three months that we thought US support kings of Saudi Arabia, Emirates they cannot stay in power in more than two weeks.’

‘If such a statement would have made against Iranians, this would have a big explosion in Iran because they cannot tolerate humiliation,’ he said.

‘Radicalism is a response to sanctions,’ Mousavian noted.