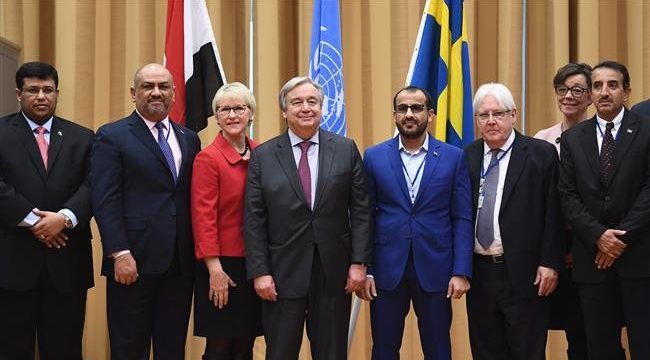 Press TV – UN Secretary-General Antonio Guterres says the Yemeni warring parties have reached an agreement on a ceasefire in the Red Sea port city of Hudaydah, as a new round of peace talks aimed at ending nearly four years of a brutal Saudi-led war on its southern neighbor came to a close in Sweden.

The UN chief made the announcement on Thursday, shortly after the delegations of Yemen’s Houthi Ansarullah movement and the country’s former Saudi-backed government agreed that the world body play a “leading role” at the vital port, which is currently controlled by the Houthis.

“There is a ceasefire declared for the whole governorate of Hudaydah in the agreement and there will be both from the city and the harbor a withdrawal of all forces,” Guterres said, adding that after the pullout, the UN would begin facilitating aid access to the civilian population.

More than 70 percent of Yemen’s imports used to pass through the docks of Hudaydah.

Hudaydah has, however, been placed under a tight siege since June, when the Saudi-led coalition and their allied militia loyal to the government of Yemen’s ex-president, Abd Rabbuh Mansur Hadi, launched a full-scale military push to seize the strategic port city in defiance of international warnings.

The significant agreement came a week after the rival Yemeni sides began peace negotiations, brokered by UN Special Envoy Martin Griffiths and his team, in Rimbo, a locality near the Swedish capital of Stockholm.

The Riyadh-backed side had on Friday said the Houthis must hand over the vital port. However, Mohammed Abdulsalam, the head of the Houthi delegation at the peace talks, strongly rejected the proposal, saying that Hudaydah must be kept apart from the military conflict, and that a government should be formed first before all parties are disarmed.

Griffiths, for his part, said on Thursday that the pullout of all forces should take place “within days.” He is due to brief the UN Security Council on Yemen on Friday.

The fate of the international airport of Sana’a, the Yemeni capital, has also been a hot issue on the agenda of the talks. The capital is under the control of the Houthis, but the Saudi led-military coalition controls Yemen’s maritime borders and airspace.

The airport has been closed to commercial flights for the past nearly three years. Griffiths said its fate would be discussed at the next round of talks, which will take place at the end of January 2019, according to the UN chief.

“It’s clear and it’s public knowledge that starting point is opening up to commercial flights, maybe domestic at first, and eventually (international),” he added.

Guterres, who arrived in Sweden late Wednesday to attend the closing session, further announced in a press conference on Thursday that both parties had also reached a series of other breakthroughs regarding the bloody conflict in Yemen, including a “mutual understanding” on Yemen’s third city of Ta’izz, another hotspot in the war-ravaged country and the scene of some of the most intense clashes between the rivals.

Leading a coalition of its allies, Saudi Arabia invaded Yemen in March 2015 in an attempt to reinstall Hadi, who had resigned amid popular discontent and fled to Riyadh.

The imposed war initially consisted of an aerial campaign, but was later coupled with a naval blockade and the deployment of ground mercenaries to Yemen. Furthermore, armed militia forces loyal to Hadi, in line with invaders, launch frequent attacks against Yemeni people in regions held by Houthis.

Since the onset of aggression, the Yemeni army, backed by fighters from Houthi Ansarullah movement, has been defending the impoverished nation against the invaders. The coalition is also resolute to crush the movement as another goal in its war on Yemen, which is teetering on the edge of famine.

The aggression is estimated to have left 56,000 Yemenis dead.

Riyadh had declared at the start of the invasion that the war would take no more than a couple of weeks.

The Saudi-led war has also taken a heavy toll on the country’s infrastructure, destroying hospitals, schools, and factories. The UN has said that a record 22.2 million Yemenis are in dire need of food, including 8.4 million threatened by severe hunger. According to the world body, Yemen is suffering from the most severe famine in more than 100 years.