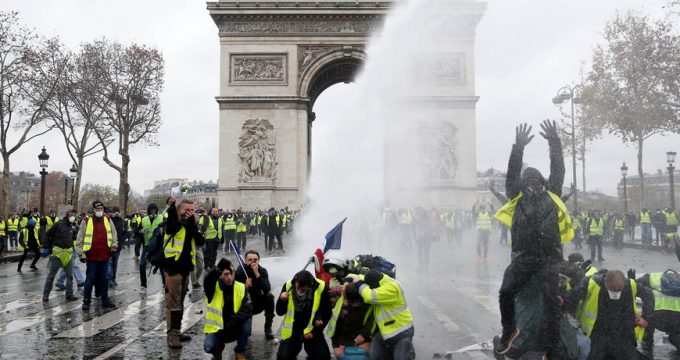 Turmoil in Europe is poison for JCPOA

Iranian Diplomacy | Kaveh L. Afrasiabi: Eight months after United States’ unilateral exit from the Iran nuclear deal, Iran is still awaiting the European delivery of their promises for undertaking concrete and meaningful action to preserve the deal known as the JCPOA (Joint Comprehensive Plan of Action). Yet, despite sincere efforts by the European Union officials to make good on some of their promises before the year’s end, the chaotic political scene in the continent may not allow this to happen.

Roiled by Britain’s increasingly chaotic and uncertain Brexit plans, France’s popular revolt, and the growing influence of far-right populist political forces, the European Union is in the midst of a political storm that certainly does not bode well for a “united and powerful” Europe. Germany too is rocked by political dissension and Merkel’s decision to step down as the leader of her party, thus throwing the future of German politics under a cloud of uncertainty. Europe is, in a word, ‘divided’ and, in the case of Macron’s France, grappling with an unprecedented political crisis warranting the embattled president’s re-prioritization of domestic needs and, perhaps, a major stepping back from Macron’s hitherto ambitious goal to play the role of a European leader. Today, under tremendous pressure at home, Macron is lucky if he can survive and hold onto power, requiring a substantial attrition of his globalist demeanor.

None of this is good news for the future prospect of JCPOA (minus US), which has been put on life-support since US’s exit and the re-imposition of nuclear-related sanctions by Washington. The JCPOA was meant to normalize Iran’s foreign trade and pave the way to foreign investment in Iran, and yet, the American deal breaker initiative has put the ball squarely in Europe’s lap, at a wrong time when the EU is increasingly fragmented and lacks the unity of purpose and determination, despite the verbal commitments to JCPOA.

Unfortunately, Iran does not have too many options and it would be futile for Tehran to press Europe to deliver the deliverables at a time when there are signs of crisis pretty much everywhere in Europe. EU’s foreign policy chief, Mogherini, has noble intentions and no one can question her sincerity, yet it is far from clear that Mogherini can summon the political forces necessary for a long-term united plan on the JCPOA.

From Iran’s vantage, it is in Europe’s own economic and security interests to safeguard the JCPOA from the precipice of extinction that it has been hurled to by the Trump administration, but the problem is that JCPOA has now become a badge of America’s impotence as a global leader and, naturally, the US is inclined to do whatever is necessary to frustrate the efforts of Mogherini and other well-intention EU officials with respect to the JCPOA. A considerably weakened and fractious Europe is ill-tuned with the strong will to stand up to American power determined to scuttle the nuclear deal — that it views as a win-lose favoring Iran.

At the moment, with several rounds of bilateral diplomacy between Iran and Europe, Tehran continues to vest hope in Europe’s ability to withstand the transatlantic pressures and translate its pro-JCPOA pronouncements into tangible results. Europe has lost a great deal of profit as a result of Trump’s unwise action and, chances are, a more inward looking Europe may be even less inclined to heed Trump’s policy prescriptions on Iran. The latter have so far gone nowhere and US is practically alone in the world on Iran, save a couple of regional allies, and that puts added pressure on Washington to seek to undermine the European leaders who pursue a foreign policy path not in line with United States. A big question regarding France is, of course, if Macron’s next chapter after the Yellow Vest rebellion will be marked with even greater independence from US, or will he try to patch up with Trump, who has been critical of him? In other words, it is far from given that the ‘new Macron’ will chart a new foreign policy map away from Washington, although there are at the moment strong signs that he may.

With respect to Britain, biggest possibility now is Theresa May’s failure followed by a general elections and or new referendum, in either case a good many months in London will be chewed up by the domestic priorities and, much like Paris, London will be less equipped to marshal the forces necessary for a grand opposition to American leviathan power when it comes to Iran and the Middle East. The irony is that although Iran has been primed for “regime change” by its rivals, this may come sooner for some of America’s Western allies. With the US actively seeking to preserve a unipolar moment, the current European sentiments for an “independent” Europe saddled by its own “European army” and so on may soon prove delusional. Negatively affecting Iran’s “Western strategy,” such negative developments cited above may in fact spur a more energetic “Eastern strategy” on Iran’s part, but that too must reckon with the differentiated interests of both Russia and China as well, instead of taking for granted a harmony of interests with the countries of the East. These are indeed challenging times for Iran’s external relations, and the turmoil in Europe simply compounds the nature of those challenges.