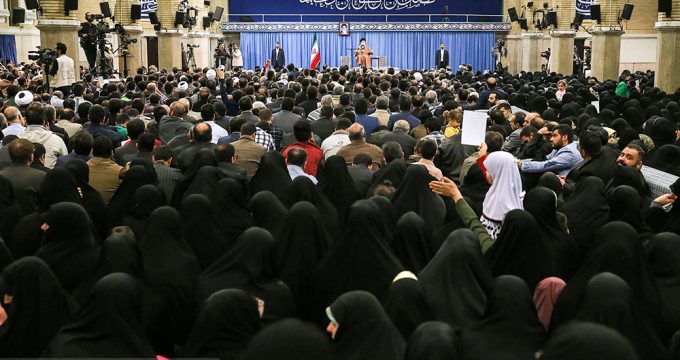 With a storm sweeping the world, now hitting France, Iran remains safe thanks to Islam

Khamenei.ir – In the face of a storm that is sweeping the world, afflicting this region– one that has now reached to France– Iran is on board a safe ship and continues to powerfully sail on this path, thanks to Islam and the Progeny of the Prophet Muhammad (pbut).

While meeting with a group of families of the martyred defenders of the shrine and martyrs of the Sacred Defense era, this morning December 12, 2018, the Leader of the Islamic Revolution stated: This is the spirit and faith of devout, revolutionary youth that helps us be as strong as mountains in the face of problems. Some representatives of the revolution left the path they had taken and the revolution also lost some of its devotees; the same happened in the early years of Islam.

Ayatollah Khamenei called the persistence and growth of devout members in the face of many obstacles a miracle of the revolution and held: However, several times more than this loss, we have had growth: new enthusiasts. This is a miracle of the revolution. You can see today, after forty years, devout Muslim youth, who haven’t even seen Imam Khomeini and the Sacred Defense era, are ready to fight, just like the youth during the early years of the revolution, with revolutionary spirit, with courage and enthusiasm, just like the great martyrs Hemmat and Kharrazi.

Ayatollah Khamenei appreciated the sacrifice made by the young martyrs and addressed their families by stating: Your young sons saved the country and prevented the Front of Arrogance from dominating over our country as they did during the era of Taghut (Pahlavi).

His Excellency described the authorities of the United States of America as indifferent to the lives of the innocent people and only caring about money: “Look at U.S. officials: watch how they are wealth-worshipping, trampling the Truth, and disregard humans’ lives and properties,” said Ayatollah Khamenei.

He went on to say: The US’s plot against the Iranian nation is exposed; they have no more plots to hit us with; they have done all they could. The US’s plot is to create problems, conflict and internal war inside our country by means of sanctions and security disturbing measures. They have done their utmost.

Ayatollah Khamenei criticized Muslim states who have established close ties with the arrogant hostile powers and asserted: Today, some in the Muslim world have made friendly pledges to the enemy. The crime that Al-Saud is committing by usurping Yemen will turn out to be detrimental to themselves. It’s been nearly four years since they started to commit atrocities in Yemen; they thought they would overcome Yemen in a few days or a few weeks; but as they advance, their defeat will be harder and the blow that they will receive will be stronger.

The Leader of the Islamic Revolution slammed Saudi rulers for being pitiless to other Muslims and said: Those serve as the Custodians of the Two Holy Mosques should be ‘stern to the infidels; yet, they are stern to Yemen, and stern to Bahrain, this will arouse God’s wrath.

Ayatollah Khamenei once again invited the Iranian nation to watch with acumen what is happening across the world and mentioned: The Iranian nation should view these issues with open eyes and acumen. In the face of a storm that is sweeping the world, afflicting this region– one that has now reached to France– Iran is on board a safe ship and continues to powerfully sail on this path, thanks to Islam and the Progeny of the Prophet Muhammad (pbut).

The Supreme Leader pointed to statements by US officials who assume Iran is on the verge of defeat and argued that: Earlier this year, the U.S. claimed that Iran was to have a hard summer and that the revolution wouldn’t see its fortieth anniversary. To their dismay, this summer was one of the best summers; and the Iranian nation will magnificently celebrate the fortieth anniversary of the revolution on 22nd of Bahman [February 11].

The Leader of the Islamic Revolution of Iran called for the Iranian nation to be vigilant in the face of deceits by the United States: The Iranian nation should maintain their awareness. When the US says in 2018 they will do this or that, it could be a deceitful plot. They might want to stir controversy in 2018 while their actual plots are for 2019. You should be completely ready and alerted.

Ayatollah Khamenei described the U.S. as a vicious enemy and held: The US is a wicked enemy, united with the Zionists and the reactionary regimes of the region. We are of course stronger and until now they have been unable to do a thing, and they won’t be able to anything in the future.

The Supreme Leader advised the young generation of Iranians as well as political entities by saying: My advice to the youth and different organizations and political entities is to be vigilant not to rely upon the enemy and prepare the field for the enemy.

Finally, he recommended the Iranian nation and the officials to work hard to develop the country to reverse enemies’ conspiracies. He asserted: I recommend the Iranian nation to work for the country, wherever they are; everyone should endeavor for developing the country’s economy and enhancing domestic production. The officials should double their efforts, and be vigilant not to be deceived by the enemy’s words, so the enemy they expel through the door cannot get back in through the window. What I feel should be done with regard to the people’s economic problems is to enhance domestic production.