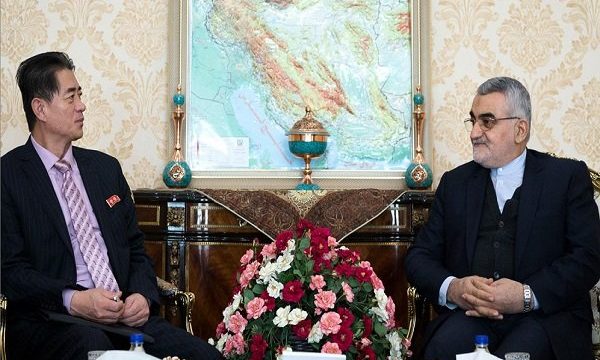 Iran, North Korea need to cooperate to tackle US sanctions

MNA – Head of Iran-North Korea Parliamentary Friendship Group, Alaeddin Boroujerdi, met with North Korean ambassador Wed. in Tehran to stress the necessity of cooperation between Iran and North Korea in the face of US sanctions.

According to the Iranian Parliament’s website ICANA, senior Iranian lawmaker Alaeddin Boroujerdi, who is the head of Iran-North Korea Parliamentary Friendship Group, met and talked with North Korean Ambassador to Iran Kang Sam Hyon in Tehran on Wednesday.

In the meeting, Boroujerdi stressed the need for cooperation between Iran and North Korea in various fields to reduce the effects of unjust US sanctions.

The senior Iranian lawmaker added that Iran and North Korea have a lot of potentials that can be used in line with the national interests of the two countries.

He hailed recent trip by the Iran-North Korea Parliamentary Friendship Group to Pyongyang as a success, saying that the parliamentary relations can facilitate bilateral political, economic and cultural relations.

He emphasized the importance of the implementation of the agreements signed by Iran-North Korea Joint Economic Commission, the exchange of students between universities of the two countries, cooperation in the mineral field, facilitating the participation of the private sector of the two sides in joint investment projects, establishing a permanent exhibition of Iranian products in North Korea.

North Korean Ambassador to Iran Kang Sam Hyon, for his part, hailed the historical and growing relations between the two countries, stressing that the existing economic and agricultural potentials in both North Korea and Iran could lead to further expansion of bilateral relations.

Hyon praised the recent visit by the Iran-North Korea Parliamentary Friendship Group to Pyongyang, headed by Boroujerdi, as important, adding that the development of relations between the two independent countries would help reduce the effects of the US sanctions, which are imposed on both countries.

The North Korean ambassador called the Islamic Republic of Iran a powerful country on the regional and international levels, saying that North Korea has always attached great importance to Iran’s military, scientific and technological progress.

He further noted that North Korea welcomes and supports cooperation in various areas with the Islamic Republic of Iran.