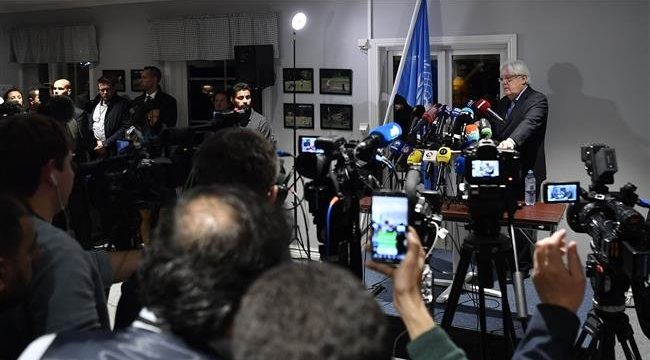 Yemen warring sides not there yet on key issues: UN envoy

Press TV- UN Special Envoy for Yemen Martin Griffiths says the country’s warring parties have not yet reached any agreement on the major sticking points on the agenda of the ongoing peace negotiations in Sweden, including a truce in the strategic port city of Hudaydah.

Griffiths made the remarks at a press conference in Sweden, where the UN-brokered peace talks continue between delegations from Yemen’s Houthi Ansarullah movement and the country’s former Saudi-backed regime.

Speaking on Monday — the fifth day of the discussions — the UN envoy described Hudaydah and Ta’izz as “two major population zones in Yemen caught in war.”

“I’m hopeful that we can reach agreements on de-escalation to reduce the fighting in both places. I’m hoping that we can, but we are not there yet,” he said.

Griffiths also hoped for agreements on a range of issues between Yemen’s warring sides during the current round of talks “in the next couple of days” and more consultations early next year to address the political and security issues.

“We are trying to close the distance so that we can ideally bring these negotiations forward to a public conclusion within the next few days,” he added.

The UN envoy further noted that the participants at the peace talks had exchanged views on the reopening of Sana’a airport, and that they would make an announcement about the release of prisoners in a couple of days.

“All I can say about the optimism, that you have referred to, is that bringing people together for the first time in two years since they sat down together, already having made an agreement on humanitarian issue, the release of prisoners, I think Yemen should be proud of these people sitting around that table today, rather than deriding them,” he said.

Top on the agenda of the talks have been four topics, including the situations in Hudaydah and Ta’izz as well as the reopening of the Sana’a airport and a prisoner swap deal.

Reports say both parties have dismissed an initial proposal for ending the fighting in Hudaydah, a lifeline for millions of Yemenis.

The proposal urges the Saudi-led coalition forces to lay down their arms and the Houthis to retreat from the port city and hand it over to a UN administration.

Saudi Arabia and the UAE launched an offensive against Hudaydah in June but they have hit a stiff brick wall in the face of a strong resistance put up by Yemeni armed forces – led by the Houthis — and the city’s residents.

The Saudi-led coalition claims that the Houthis are using the port city for weapons delivery, an allegation rejected by the Yemeni fighters.

No agreement on Ta’izz ceasefire

Meanwhile, reports said that the UN has called for an unconditional truce in the southwestern city Ta’izz, which is occupied by Saudi-backed militants but besieged by the Houthi fighters.

It has also proposed a joint working group that includes the UN to monitor the Ta’izz ceasefire, and the reopening of all roads and the city’s airport for humanitarian operations.

However, there has been no agreement over the issue.

Additionally, reports say Yemen’s opposite parties are still widely divided in reaching an implementation plan for the reopening the airport, which has been closed to commercial flights since August 2016.

The negotiators from the former Saudi-backed regime insisted that all flights to and from the Sana’a airport must be inspected at airports in Aden or Say’un.

However, Mohammed Abdulsalam, the head of the Houthi delegation at the Sweden discussions, rejected the proposal.

The Houthis had earlier proposed to place the Sana’a airport under direct UN supervision.

“The Sana’a International Airport is a major airport in Yemen, serving about 70 percent of the country’s population. It is the most important transportation hub in the country. No obstacles or conditions should be set for the reopening of the Sana’a airport,” said Mazen Ghanem, spokesman of the Yemeni General Authority for Civil Aviation and Meteorology.

Ahead of the talks, a UN-chartered plane carrying 50 wounded Houthi fighters and three Yemeni doctors left Sana’a for Oman’s capital, Muscat, for treatment.

A mass prisoner exchange has also been raised in the negotiations, but an announcement is yet to be issued.

The brutal Saudi-led war was launched in March 2015 in an attempt to reinstall Yemen’s former Riyadh-allied regime and crush the Houthis, who have been running state affairs in the absence of an effective government.

In their latest joint statement, UNICEF and the World Food Programme said that up to 20 million Yemenis — two-thirds of the country’s population — are food insecure.