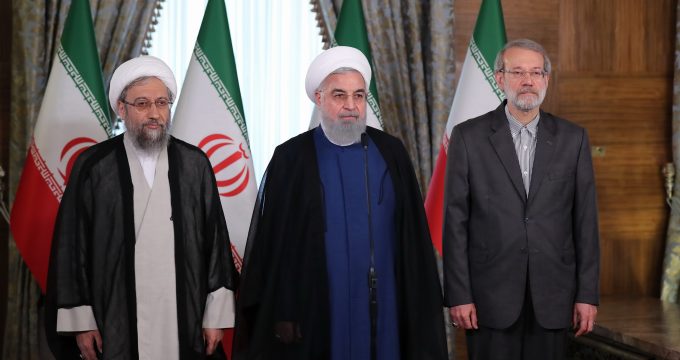 MNA – President Hassan Rouhani said Tue. that Iran’s oil sales have been faring much better than how they did before the Nov. 5 US sanctions targeting the country’s oil sector.

The president made the remarks at the end of a meeting with Parliament Speaker Ali Larijani and Judiciary chief Ayatollah Sadegh Amoli Larijani on Tuesday.

After the Nov. 5 sanctions, the US was anticipating a huge turmoil in Iran’s economy, but the country’s business elite took certain measures that turned the tide against the US, said Rouhani.

He maintained that the timely performance of the Central Bank of Iran and the business community have resulted in a tangible peace in the society even after the US sanctions hit the country’s oil and banking sectors.

The president noted that the country’s exports have been on an upward trajectory for the first eight months of the current Iranian fiscal year (March to November), saying the exports have had over 13% increase in this period.

Iran’s oil sales is in good condition despite the US efforts to chock off the country’s oil revenues, said Rouhani, adding that Iran’s oil exports have fared much better after the Nov. 5 than how they were before the sanctions.

He added that the report by the oil ministry, which was presented at Tuesday’s meeting, was “promising”.

Rouhani further noted the US failure in swaying the opinion of OPEC to keep the output level the same for the member states, saying Iran, in contrast, was successful at the recent OPEC meeting and its production level will continue as before.

The 175th OPEC meeting in Vienna on Dec. 7 concluded with Member States endorsing Iran’s exemption from a production cut by 800,000 barrels per day in the first half of 2019 in a bid to prevent supply glut and bolster the prices.

Iran says as long as it is faced with sanctions, it will not participate in any agreements on production cut.

Mmeanwhile, Russia and other non-OPEC producers will contribute to the production reduction by at least 400,000 b/d for improving oil prices in the market.