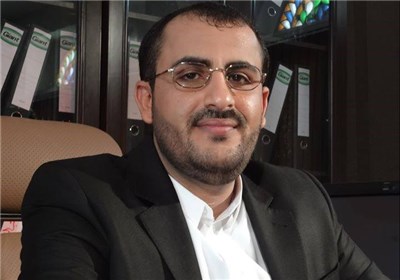 IRNA – The deposed government of Yemen will not take control of Aden airport and closing Sana’a airport is a war crime, head of Ansarullah delegation in Sweden peace talks said.

According to a Sunday report by the Yemeni TV Channel ‘Al-Masirah’, Mohammad Abdul Salam called for reaching agreement on a transition stage and promoting plans to build trust between the two parties.

There is no difference in the overall framework and the measures taken for building trust which have been proposed by the United Nations, Abdul Salam said.

If the aggressors try to bring negotiations to a failure, confronting enemies will be the only way, he added.

Yemen is ready to release all war prisoners, he said.

Abdul Salam called for identifying the fate of Yemeni prisoners kept in the United Arab Emirates and Saudi Arabia.

Elsewhere in his remarks, the Yemeni official underscored the role of foreign countries in the Yemeni war.

The intra-Yemeni talks which were earlier supposed to be held on September 6 postponed due to Saudis’ sabotage.

The first round of the Yemeni peace talks were held in December 2015 in Geneva but the meeting produced no results.

Earlier, the Iranian Foreign Minister Mohammad Javad Zarif in a message expressed Iran’s support for the intra-Yemeni talks to resolve the crisis.

“Iran supports the upcoming intra-Yemeni talks in Sweden. All sides should enter constructive and responsible engagement to end the crisis in #Yemen. The world has historic responsibility to back dialogue incl by halting arming of aggressors,” he tweeted earlier.

The Iranian foreign ministry has also offered the country’s support for the upcoming Yemen talks in Sweden, calling on all Yemeni sides to have a “constructive and responsible” engagement in the Stockholm talks with the goal of putting an end to the humanitarian crisis in Yemen.

Saudi Arabia and a number of its regional allies launched a devastating military campaign against Yemen in March 2015, with the aim of bringing the government of Mansour Hadi back to power and crushing the country’s Houthi Ansarullah Movement.

The assaults of the Saudi-led coalition forces have failed to stop the Yemenis from resisting the aggression.