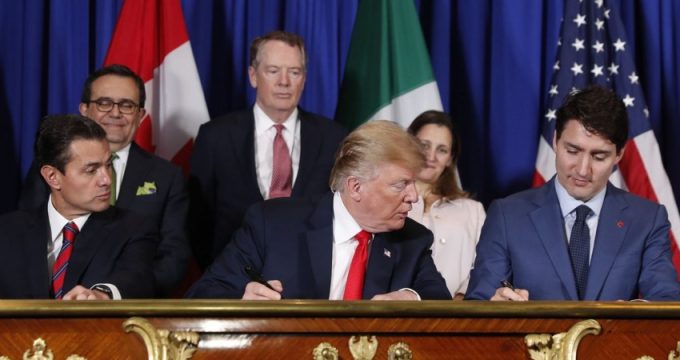 Lessons from NAFTA for Iran, to renegotiate the nuclear deal

Iranian Diplomacy | Kaveh L. Afrasiabi: Tehran can learn from Ottawa’s give and take with Trump administration to strike a slightly modified version of the JCPOA.

According to Iran’s President Hassan Rouhani, the Trump administration has made 11 attempts to negotiate with Iran, which must be a record. The results must be disappointing to Trump, who boasts about the ‘art of the deal’ and who has on more than one occasion hedged his bets on Tehran coming to the negotiation table — on his terms. A rude awakening, Trump must by now realize that Iran is a “tough knot to crack” and not so easy to bring to his will. Iran’s resistance is, of course, not a surprise to Iran watchers, who know of history and the futile efforts of hostile governments to impose their will on the Iranian government. The big question is whether or not Trump now gets it that his Iran strategy doesn’t work and he needs an alternative plan?

During his presidential campaign, Trump faulted the US negotiators for failing to use the leverage of being prepared to walk away and leave the table. Accordingly, Obama was too eager for a deal to do that and hence the “terrible” Iran nuclear agreement, which Trump cancelled in August unilaterally. Having walked away from an important multilateral deal, Trump must now be prepared to pay the consequence, i.e., US’ isolation in the international arena on Iran, and die by the sword of non-negotiation. Iran’s unwillingness to cater to his demands and frustrate them, on the other hand, serves a timely notice of crisis in Trump’s negotiation style, which is one of arms twisting and bullying, rather than the art of persuasion. At the same time, Trump is seeking a ‘grand bargain’ with Iran by seeking a global resolution of all the outstanding issues between US and Iran, which is fine except that he is convinced that this is a one-way process and Iran has no legitimate grievance. As a result, it is not a bargain at all, but ultimatum, take it or leave it, leaving little or no incentive for Iran on the side of the bargain. This in turn violates the art of negotiation, which revolves around the balancing and rebalancing of incentives on both sides to enter into a mutually-acceptable formula for negotiation, which essentially runs against the logic of superpower bullying.

The dictates of pragmatic realism, on the other hand, propel the Trump administration in directions not entirely in line with the logic of bullying, which is in some instances borderline irrational. As a global power, the US under Trump has had to increasingly adjust itself, which is why Trump has renegotiated NAFTA (North American Free Trade Agreement) with Canada and Mexico, contrary to his early denunciation of NAFTA as yet another JCPOA — by calling both in similar terms. Even with respect to INF Treaty with Russia, the White House has been sending new signals that it may reconsider pulling out if Russia meets its demands. In other words, when it comes to diplomacy, nothing is written in stone and once seemingly intractable differences can be overcome by the infusion of pragmatic realism.

Thus, learning from other parties dealing with US, such as Mexico, Canada, a low bar for determining success was finally set despite a complicated agenda. Both Canada and Mexico appear to have given in to Trump’s arms-twisting, restraining themselves for example to voluntary restraints on auto exports, but combing through all the 34 chapters of the new agreement reveals that Trump hardly won more than a partial victory and the other two parties scored in a number of areas, such as the pharmaceutical industry. It was in other words a process of give and take, irrespective of the sound and fury of Trump against the old NAFTA.

Can Iran then apply some of these lessons with respect to the Trump administration and its current bellicose approach toward Iran? One hypothetical scenario is as follows: A bilateral negotiation would commence with Trump’s side sticking to their maximalist positions and yet in the ensuing process mellowing down to more realistic positions that could spell a re-embrace of the JCPOA with certain, minimalist, modifications nicely camouflaged as far-reaching. The key is to withstand the pressure and to stand one’s ground in such a negotiation, instead of shunning it as taboo. Incremental changes are intrinsic to Trump’s style, e.g., the new NAFTA requires 75% of the contents of any auto imported into the U.S. to be made in North America in order to avoid tariffs. That’s up from 62.5% under the old NAFTA that originally took effect in 1994. Aside from the question of difficulty of verification of this measure, the numerical increase still falls short of a substantial revision of the agreement as called for by candidate Trump. Some have argued that Canada’s tough “high-pressure” negotiation style paid off, even though it was severely criticized by Trump: “We’re very unhappy with the negotiations and the negotiating style of Canada,” Trump once complained, and yet the impasse between US and Canada was broken by both sides nodding to compromise, which would not have been forthcoming from Washington if Canada’s negotiators had played it soft.

So the one lesson from new NAFTA for Iran is that forcing a retreat by Trump on his unreasonable Iran requests is possible, but only if Iran somewhat like Canada combines the elements of smart negotiation, instead of caving in to pressure. Again, much like JCPOA, Trump trashed the old NAFTA as the “worst deal ever negotiated,” and, yet, the renegotiated deal isn’t in reality very different from the old one and many pundits agree it is a repackaged old NAFTA. Can a repackaged JCPOA also result from a new bilateral US-Iran negotiation? This is the million-dollar question.