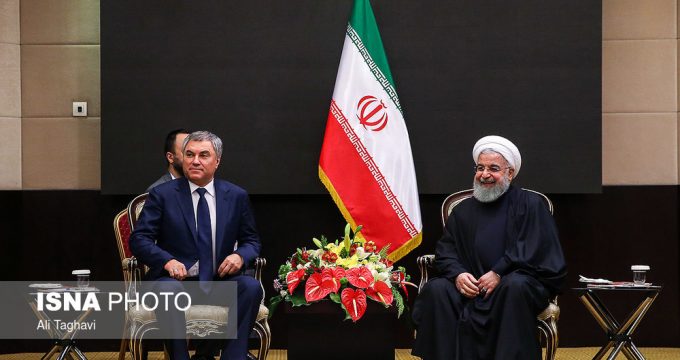 December 9, The Iran Project – Iranian President Hassan Rouhani has met with several Asian countries parliament speakers who are in Tehran for the second Speakers’ Conference on the challenge of terrorism and inter-regional connectivity.

Speaking to the speaker of parliament of Russia, Rouhani said, “No third-party country is able to undermine the bilateral, regional and international relations between Iran and Russia.”

He continued, “Fortunately in the recent years, we have taken the best advantage of potentials and capabilities to deepen relations between the two countries.”

“Cooperation in energy, joint ventures, agriculture, transportation and construction of Incheh Borun-Gramsar railway are the successful examples of cooperation between Iran and Russia”.

Volodin, for his part, said, “Fortunately in the recent years, Tehran-Moscow relations have been developing based on friendship between the Presidents of the two countries.”

“There is collective determination in Russia for full implementation of agreements with Iran and we will make efforts in this regard,” he added.

During meeting with Pakistani speaker, President Rouhani called on all neighboring and regional countries to step up an all-out fight against terrorism and extremism, saying major powers have created and supported terrorist groups.

He said the conference, attended by speakers from Afghanistan, China, Iran, Pakistan, Russia and Turkey, was a “good and useful initiative” to improve security in the region and cooperation among regional countries, adding, “Those who have created terrorist groups in the past decades, had in fact committed high treason against regional nations.”

“The US, the West and the Zionist regime (Israel) are supporters of terrorist groups’ activities in Iran,” Rouhani stated.

Qaiser, for his part, said Islamabad was prepared to cooperate with Tehran in the fight against terrorism and the promotion of regional security.

He expressed hope that Iran and Pakistan would strengthen trade and economic cooperation, saying no one would be allowed to harm mutual relations.

Speaking in a meeting with the Speaker of Parliament of Afghanistan, President Rouhani said, “Tehran-Kabul relations are beyond neighbourliness and therefore, overcoming terrorism and establishment of security and stability and economic development in Afghanistan is very important for the Islamic Republic of Iran.”

“Relations between Iran and Afghanistan is developing in different fields, and currently, Iran has constructed the railway to the border of Afghanistan to connect the rail systems of the two countries,” he continued.

The President noted, “Chabahar region is a very good opportunity for development of economic relations between the two countries and for investment and investors.”

Ibrahimi said in this meeting, “Iran and Afghanistan have a lot of common grounds with regard to culture.”

“Iran and Afghanistan are both major victims of terrorism in the region and the world and we believe that cooperation between the two countries in fighting terrorism will benefit not only the two, but also the entire region,” he added.

In the meeting with Yildirim, the Iranian president said Tehran and Ankara have been dealing with the problem of terrorism for years, and every time the two neighbors have promoted cooperation in the war on terrorism, they have achieved more success.

Rouhani also voiced Iran’s willingness for closer interaction with Turkey in various fields, such as the energy and banking industry.

For his part, the Turkish speaker referred to the threat of terrorism as the common enemy of Turkey and Iran, stressing that regional terrorism requires a regional solution and that interference by trans-regional powers would only complicate the situation.

Yildirim also gave an assurance that Turkey will maintain relations with Iran under any circumstances, and denounced the US sanctions against the Islamic Republic as false and counterproductive.

Addressing the conference on the same day, Rouhani stressed the need for joint efforts to counter the US policies and create a more powerful region.

Rouhani also lashed out at what he has described as US “economic terrorism” against Iran.

Rouhani said America’s economic terrorism was specifically evident through Washington’s decision to withdraw from a multilateral nuclear deal with Iran and restore sanctions that the same deal had lifted against the country.

The parliament speakers of Afghanistan, Iran, Pakistan, Turkey, China and Russia held their second conference on the challenges of terrorism in the Iranian capital Tehran on Saturday (Dec. 8).