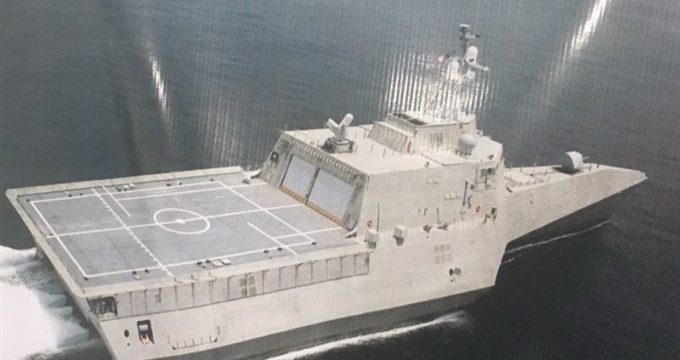 Tasnim – Iran’s Navy on Saturday unveiled the blueprint for a new military trimaran, a multi-hulled watercraft with optimized naval capabilities.

During a visit to an exhibition of the Iranian Navy’s achievements, Deputy Chief of the Army for Coordination Rear Admiral Sayyari unveiled the scheme for the new homegrown vessel, dubbed the “Safineh (ship) project”.

The Iranian trimaran will have low hydrodynamic resistance in high velocities, have appropriate hydrostatic balance, and enjoy a large deck, twice as big as a single-hull vessel of the same tonnage.

With a speed of above 40 knots, the military vessel could be employed in guerrilla warfare on the coast and for rapid reaction operations.

A prototype of the Iranian trimaran has been produced to test the solidity and hydrodynamic performance of its lateral structure.

In a meeting with Navy commanders earlier this month, Leader of the Islamic Revolution Ayatollah Seyed Ali Khamenei praised as “great and fabulous” the advances that Iranian military forces, the Navy in particular, have made since the victory of the Islamic Revolution in 1979, saying the Navy’s success in bringing into service homegrown vessels such as the Sahand destroyer or Fateh and Qadir submarines heralds more progress day after day.