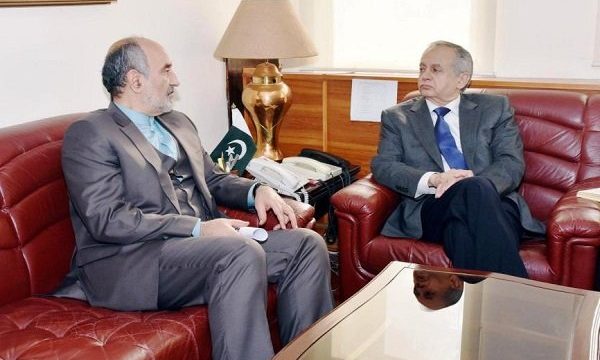 In a meeting in Islamabad on Thursday, Iranian Ambassador Mehdi Honardoost and the Senior Adviser to Pakistani Prime Minister for commerce, industry and investment Abdul Razak Dawood discussed ways to expand bilateral trade between Iran and Pakistan to the hit the target value of $5 billion.

The Iranian ambassador to Pakistan, in the meeting, expressed hope that the two sides would continue and increase relations between private sectors in particular and the chambers of commerce of the two countries. Honardoost also expressed hope that the Pakistani side would intensify its efforts to implement the existing agreement to jointly open border crossings of Pishin, Mand and Rimdan with the aim of developing bilateral trade relations between the two countries and facilitating border trade for the benefit of the residents on the two sides of the shared borders.

Honardoost also expressed the readiness of the Iranian government to contribute to the China-Pakistan Economic Corridor and help Pakistan to access Central Asian markets through the participation of Iranian companies in reconstructing the roads and railways between the two countries.

The two sides also discussed the 21st meeting of the Joint Economic Commission and the 8th meeting between Iranian-Pakistani economic ministers.

Meeting Pakistani energy needs and holding special joint trade exhibitions between the two countries were among other issues discussed in the meeting.

Figures released by Iran’s Trade Promotion Development Organization (TPO) show that Iran’s exports to Pakistan with 58% increase rose to $688 million over the first 7 months of the current Iranian year (from March 21, 2018 to October 22, 2018). Meanwhile, the bilateral trade stood at $875 million.

Pakistan is currently the eighth destination for Iranian exports excluding crude oil, despite the fact that banking ties between the two countries are affected by the unilateral US sanctions on Iran.