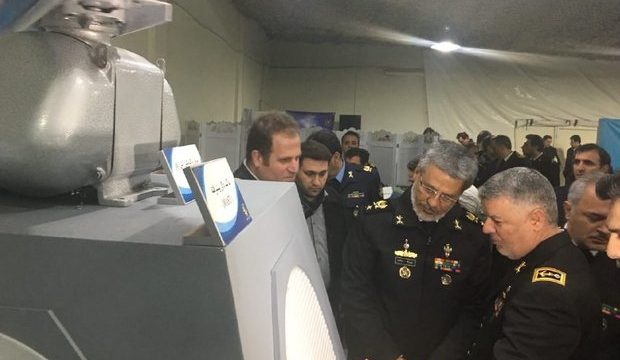 During the inauguration ceremony of an exhibition on naval developments and achievements in Tehran on Saturday, General Sayyari said the next-generation Fateh-class strategic submarine and Dena-class destroyers would join the navy’s armadas in the coming months.

Fateh (Conqueror) is a 100% domestically-manufactured submarine. The 600-ton Fateh is among semi-heavy submarines and is equipped with state-of-the-art weaponry such as torpedoes and naval mines. It can operate more than 200 meters below the sea surface for near five weeks, according to Navy officials.

Dena Destroyer is the latest version of Moudge-class vessels, he added.

The news comes after another new generation of Moudge-class destroyer, ‘Sahand’, with twice the defensive and offensive power of Jamaran destroyer, joined Iran’s naval fleet in the Persian Gulf on Dec.1.

According to Commander of the Iranian Navy Rear Admiral Hossein Khanzadi, Sahand is missioned to ensure maritime security in the region and also to participate in different drills.

The message of manufacturing Sahand destroyer is that Iran has overcome sanctions, he said, adding, “a country which can produce its required weapons, doesn’t depend on other countries for providing it with security.”

“Ensuring the security of the Strait of Hormuz is an easy task for us. We thoroughly observe measures of enemies and even hear their conversations. And if that’s not the case, our presence at sea has no meaning; enemies are being monitored instantaneously from the sea and air by drones.”