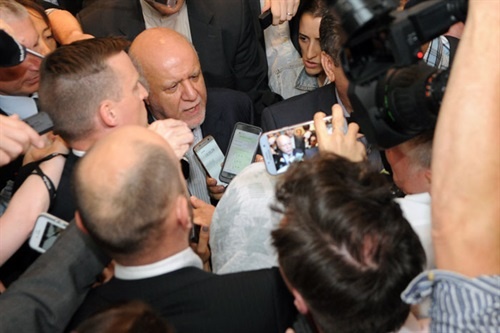 SHANA — Iranian Minister of Petroleum Bijan Zangeneh said the outcome of 175th OPEC Meeting served Iran’s interests as well as those of the organization.

Speaking to reporters following the prolonged meeting of members of the Organization of the Petroleum Exporting Countries (OPEC) in Vienna on Friday, the official said Iran was fully exempted from any OPEC output cut agreement, adding the organization would send Iran a separate letter on its exemption from any production cut agreements.

Asked whether he was frustrated by the US trying to influence OPEC decisions, he said, “Yes, we have seen such behavior from the US before. OPEC does not like to be pressurized from outside countries. I just don’t know when the US administration learns a lesson from this manner.”

He described OPEC talks as difficult and complicated. OPEC meeting began on Thursday and the talks took over 10 hours for the group to reach a final agreement on production cuts in a bid to improve the prices.

The member countries agreed to slash the group’s production level by 800,000 b/d.

Asked about Russia’s involvement in OPEC agreement, Mr. Zangeneh said Moscow did not influence the OPEC agreement but its role in non-OPEC producers’ decision to cut their production could not be ignored.

In response to a question on why the talks took too long, he said, “We needed more time.”