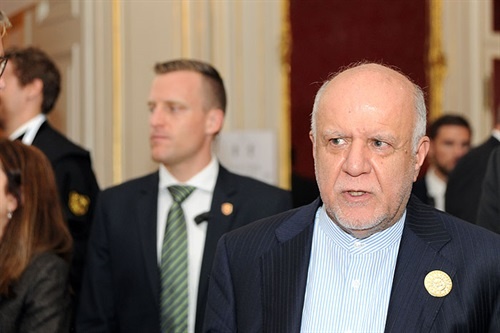 Iran must be excluded from production decisions: Min.

SHANA — Iranian Minister of Petroleum Bijan Zangeneh said the country must be excluded from any decisions by OPEC members regarding production cuts.

Speaking to reporters upon his arrival at Helsinki Hotel in Vienna on Thursday morning, the official said, “As I have said earlier, at this stage and as long as the sanctions continue, Iran does not participate in any agreement on OPEC production, and must be excluded from any decision on the level of production.”

“Iran has always supported OPEC and its positions for market stability, but at this point, as I said earlier, as long as Iran is faced with sanctions, it will not participate in any agreements on production,” he reiterated.

The official said many proposals were on the table regarding production cuts and members which wanted to reduce their output must make decisions about it.

He also refrained from announcing Iran’s crude oil production and exports, saying “This would lead to more US pressure on Iran.”

Asked about potential OPEC production cuts, Mr. Zangeneh said, “Different figures are proposed and we must wait and see what decision OPEC members will make.”

He also said that $60 to $70 dollars per barrel would be reasonable for crude oil.

“If Mr. Hook has come to Vienna to apply for US membership in OPEC and therefore meets OPEC members, this request can be reviewed, but if he wants to push for more pressure on Iran through OPEC, it is an unprofessional move.”

“OPEC is an independent organization and no part of the US Department of Energy to take orders from Washington.”

Not Happy with Qatar Leaving OPEC

“Iran is not happy with the departure of Qatar from OPEC and is unaware of the reason behind this decision,” the Iranian Minister of Petroleum said.

In response to a question about Iran’s exit from the Organization of the Petroleum Exporting Countries, he stated: “Iran is one of the founders of OPEC and is not going to leave the organization.”

Zangeneh also touched on meeting with Russian Energy Minister Alexander Novak in Vienna, saying: “I welcome this meeting for exchange of views between the two countries.”

JMMC needed to operate within scope of its mandate

Last year, the committee operated beyond the scope of its authority, he said rejecting rumors that Iran would join the committee next year, he said.

In response to the question of whether the committee should stop its activities, the minister said: “It would be better if the committee acted within its mandate instructed to it by OPEC.”

An OPEC Meeting is scheduled for Thursday (December 6) and a meeting of oil producers and non-OPEC members on Friday (December 7) in Vienna.