Yemen war is ‘devastating as a mother’

Euronews |  Seana Davis: In April this year, Yemen was hailed the “world’s worst humanitarian crisis” by UN Secretary-General, António Guterres. As the conflict rolls into its fourth year, the number of those suffering has become incomprehensible. In a press statement released on November 21st, Save the Children announced that 85,000 children under the age of 5 may have died since the start of the war. Euronews spoke to Sukaina Sharafuddin, a Yemeni woman who works for Save the Children, about her country, her life, and the war raging around her.

“Devastating as a mother”

The Yemen war was sparked by political unrest in 2011 which was coined the ‘Yemen Uprising’ with the ousting of Ali Abdullah Saleh as president. Many view the war as a powerplay between Iran and Saudi Arabia for wider Middle Eastern control. In 2015, Saudi-aligned forces with US backing intervened to reinstate the ousted government against Iran-backed Houthi rebels. The violent outbreak in an already impoverished nation descended the citizens into a humanitarian crisis which became arguably overshadowed by the war against the so-called Islamic State, or Daesh, in Iraq and Syria.

Sukaina is a mother of a three-year-old boy and has been a humanitarian worker for 7 years in Yemen, seeing her country move from destitute to deadly. “As a Yemeni, I see it from the perspective of Yemenis living, and I’m at the world’s worst humanitarian crisis,” she said. 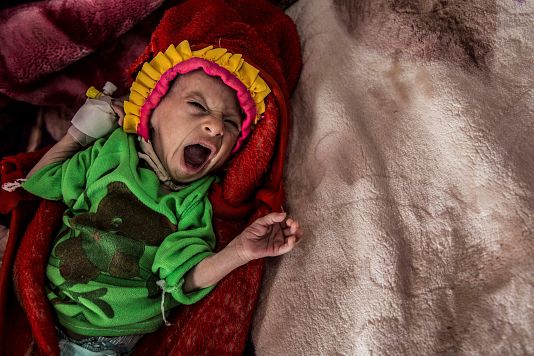 “Every day I come into work, and yes, we go despite all the challenges that we face every day. We go to the field and we visit children whether they are in support or in clinics or visit them in their houses in case we have to process them and follow up with their cases. If they are maimed or injured from airstrikes or on-ground conflict. So yes, I’m doing both. And it’s really just a struggle to live here in Yemen and it’s very devastating as a mother,” Sukaina said.

“The situation never got better”

Sukaina described how she felt seeing her country descended into war. “Before the conflict escalated … Yemen was already considered the poorest country in the Middle East. But people were still living. We were still living our ordinary lives, normally – children go to school”.

“But then, when the conflict escalated in 2015, oh God, all hell broke loose, honestly. Because, just remembering those airstrikes that we heard in the first week, hundreds of airstrikes falling. When you hear a missile falling down, me as a mother and an adult, I start shivering and my heart is pumping and I hug my child and run to the hold, and we wait for it to explode. Because you never know, maybe it will fall onto your roof. It was very very terrifying. And then the situation never got better. It just kept on deteriorating and deteriorating”. 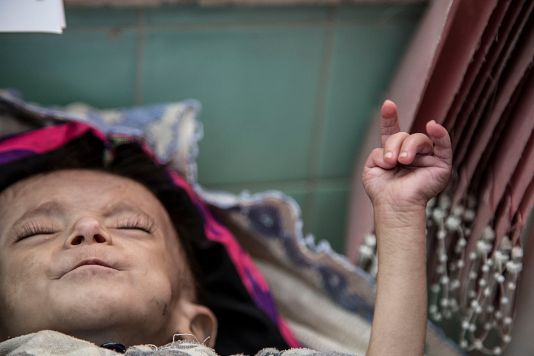 Ali is 5 and suffers from malnutrition – Sana’aWFP/Marco Frattini

“I remember us all saying that no way will it last two months. Like, oh my God we need to tell the world. Everybody will be on our side. A solution will be made. But nothing was happening. And then, year after year, passing by, and now we are reaching our fourth. And things never got better. At first, we were worried about on-ground conflict and airstrikes but now, people are dying of starvation. Who would have imagined that in 2018, about to start 2019, that children are dying of starvation?”

The UN reports that fuel prices have been hiked 110% in the past 3 years making the cost of transportation out of reach for many Yemenis. I asked Sukaina if there was a story of a child she would like to tell. She recounted meeting a mother, a single parent, who had 5 children. Two of them were malnourished while her daughter was injured in her eye by shrapnel from an airstrike.

“So, this mother doesn’t know how to provide for her family. She has two very sick children and she didn’t know what to do. I remember her saying that she had to remove the shrapnel from her daughter’s eye by herself. How painful is that, to remove with such pain because you can’t afford to take her to a hospital that is still functioning. It’s just devastating,” she said.

This family’s story is just one of many. An image taken by the New York Times of a dying 7-year-old by the name of Amal captured the world’s attention in October, with the New York Times’ Declan Walsh telling Euronews that “she was a young girl who was lying deathly still. Her mother was sitting over her. She told us that they were refugees from another part of the country. Their home had been bombed in Saada, along the border with Saudi Arabia.” Just three days after the New York Times published their story, Amal passed away.

“They are dying in their houses quietly”

According to the UN, three-quarters of the population, or more than 22 million people, are in need of humanitarian assistance. Poverty has spiked with a 30% jump between 2017 and 2018. 60% of the population or 18 million people are food insecure with 8.4 million unsure of when they are going to secure their next meal.

A common misconception is that food is unavailable. That is untrue, at least to the extent that food is readily available in supermarkets and shops in large cities such as Sukaina’s base – Sana’a. The country is economically bankrupt with the Yemeni currency, the rial, crippled. The UN estimates that 1.25 million civil servants are unpaid while food prices have jumped 98% from 2015-2017. In the most hard-hit regions, unemployment is as high as 50%. 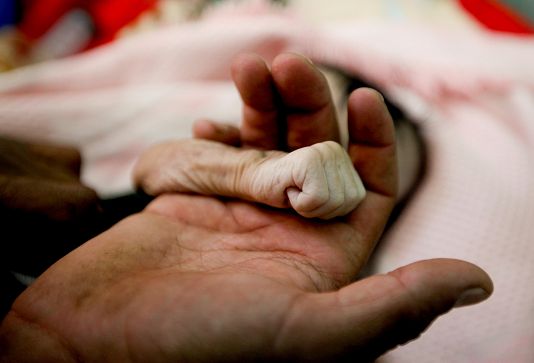 Saleh holds his daughter’s hand who passed away in the malnutrition ward in Sana’a, YemenREUTERS/Mohamed al-Sayaghi

“The problem is that food is available in the markets,” Sukaina reiterates. “Imagine, you are very hungry, your child is extremely hungry and you see food everywhere and you don’t have that money to pay it”.

With the devaluation of the rial and continued airstrikes on the key port city, Hodeidah, more and more continue to starve. “At the beginning, they used to cry and scream and talk about it,” Sukaina said. “But now, their eyes are just exhausted and their faces are so pale because them, themselves are are hungry. They just stare at their starving children not knowing what to do”.

“Something serious must happen and stop selling arms”

The killing of Washington Post journalist Jamal Khashoggi put the spotlight on the Yemen conflict and the Saudi involvement in it. As the aftermath of the investigation into Khashoggi’s murder unfolds, countries are beginning to react with Germany, Finland and Denmark halting their arms sales to the Saudis. 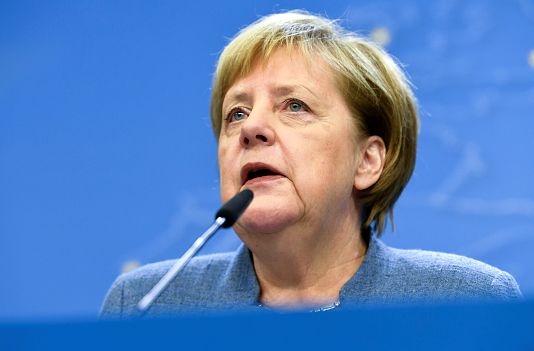 Sukaina accredits her “last thread of hope” to UN-backed peace talks between the Saudi-led forces and Houthi rebels organised for the year-end. Previous plans for talks have proved futile with the first peace talks in two years collapsing in September.

“When you see an image of a child or a Yemeni, when you hear about it, think of your son or daughter or so on and just imagine they go hungry every night, crying themselves to sleep because they are just thirsty for clean water or searching for food to eat. So, Yemen is the world’s worst humanitarian crisis and the worst place in the world to be a child in,” Sukaina said.