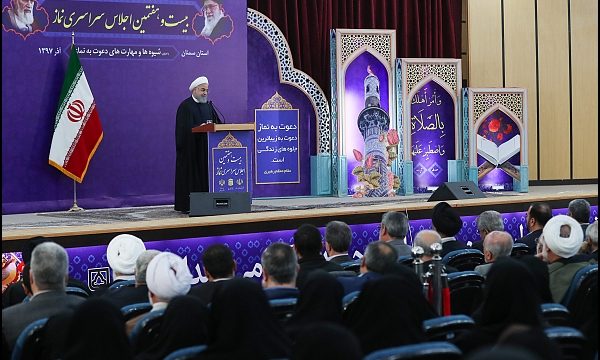 IRNA – The 27th national conference on Muslim prayers (Namaz) started in Semnan on Wednesday with a message by the Supreme Leader of the Islamic Revolution Ayatollah Seyyed Ali Khamenei.

Namaz or Muslims prayers, is one of the Five Pillars in the faith of Islam and an obligatory religious duty for every Muslim. It is a physical, mental, and spiritual act of worship that is observed five times every day at prescribed times.

Provincial officials from different parts of the country as well as and 1,600 guests are present in the Namaz conference underway in Semnan the provincial capital of the north central Iranian province.

Iranian President Hassan Rouhani along with a number his cabinet members have also attended the day-long prayers conference to deliver a speech.

An official at the event headquarters told the Islamic Republic News Agency (IRNA) that 825 women and 711 men have sent their related works to the conference.

Mansour Sargazi further called on the media to reflect the news about the today conference which as he described is a great event to foster the culture of the Muslim prayers.