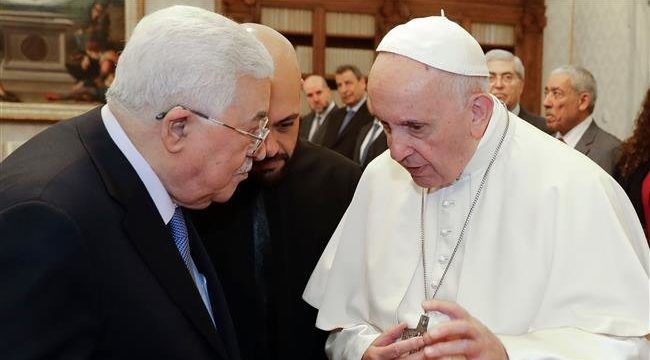 Press TV – In a meeting with visiting Palestinian President Mahmoud Abbas, Pope Francis has expressed his concern about the status of Jerusalem al-Quds, months after the US recognized the occupied Palestinian city as Israel’s “capital” in defiance of widespread international criticism.

The two met at the Vatican’s Apostolic Palace on Monday, with Abbas briefing the Holy See on “the implications of the US decision” last year, the Palestinian news agency WAFA reported.

Washington’s move shocked the international community, flying in the face of the Palestinians’ demand that the city’s eastern part serve as the capital of their future state.

The Palestinian Authority, in return, stopped recognizing any mediating role by Washington, which not only remained defiant, but also relocated the US Embassy from Tel Aviv to al-Quds.

The city hosts al-Aqsa Mosque’s compound, Islam’s holiest site, and is also of religious significance to Christians and Jews.

During the meeting, “particular attention was reserved for the status of Jerusalem, underlining the importance of recognizing and preserving its identity and the universal value of the holy City for the three Abrahamic religions,” a Vatican statement said, referring to Islam, Christianity and Judaism.

Last year, the Vatican reacted to US President Donald Trump’s contentious policy shift on Jerusalem al-Quds, saying the city’s “status quo” had to be respected.

Israel seized the entire Palestinian territory of the West Bank, including East al-Quds, in 1967. The international law considers the territory as occupied and views the regime’s construction activities there as illegal.

Palestinian President Mahmoud Abbas (R) arranges his hat as he is welcomed by Italian Prime Minister Giuseppe Conte, upon his arrival for a meeting at the Chigi Palace in Rome on December 3,2018. (Photo by AFP)

He also paid a visit to the Italian capital, Rome, where he held talks with President Sergio Mattarella and Prime Minister Giuseppe Conte over the latest developments in the region as well as ways to bolster bilateral ties.

US ‘obstacle to Mideast peace’

Abbas, meanwhile, stressed in remarks to Italian daily La Stampa that the US efforts do not contribute to peace in the Middle East.

“The US cannot be the only mediator in the Middle East,” he asserted.

Washington under Trump has also been planning to roll out a so-called “peace” plan for the Middle East, hailing it as “the deal of the century.”

The plan, however, reportedly ignores key Palestinian demands, including their claim to al-Quds.

“A state which constantly imposes punitive sanctions against Palestine cannot be a mediator. US leadership is an obstacle in the Middle East,” Abbas added.

The US has also ended its contributions to UNRWA, the United Nations agency for Palestinian refugees.

“We do not want to continue to cooperate with the current US administration,” the PA chief said. “We will not agree with conditions that violate international law.”