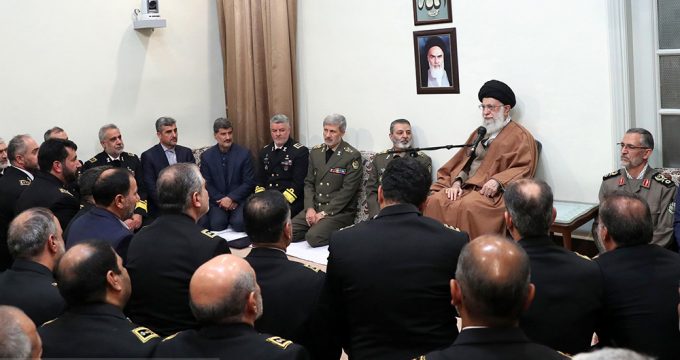 Weekly report: Iran not seeking to start war with any country: Leader

Iranian Parliament Speaker Ali Larijani says the United States plans to make Israel a dominant force in the Middle East through its ‘deal of the century’ plot, but Iran is determined to foil it.

US Secretary of State Mike Pompeo in a statement expressed concern over recent remarks made by Iranian President Hassan Rouhani addressing the 32nd International Islamic Unity Conference in Tehran.

The 32nd edition of Islamic Unity Conference entitled ‘Quds, the Axis of Unity of the Ummah’, has released its final statement, with an emphasis on unity among Muslims and putting an end to regional conflicts.

4th round of high-level talks between Iran, Europe is held

The fourth round of high-level political talks between Iran and the European Union was held in Brussels on Monday.

Leader of the Islamic Revolution Ayatollah Khamenei has urged movie producers, directors, and actors to be vigilant about the enemies’ soft war.

Iran, EU reiterate resolve to abide by JCPOA despite US exit

Iran and the European Union have once again stressed their resolve to keep the 2015 nuclear deal alive despite the unilateral US withdrawal from the international accord.

Head of the Atomic Energy Organization of Iran (AEOI) Ali Akbar Salehi has arrived in Vienna on Wednesday to attend the International Atomic Energy Agency (IAEA) Ministerial Conference on Nuclear Science and Technology.

Ayatollah Khamenei: Iran not seeking to start war with any country

Leader of the Islamic Revolution Ayatollah Seyyed Ali Khamenei says Iran is not seeking war with any country, but the Armed Forces should develop their capabilities to deter any potential aggressor.

Iran ready to help Afghan nation, govt. in their quest for peace

Iranian Foreign Minister Mohammad Javad Zarif said Iran is ready to continue to help the people and government of Afghanistan in their quest for peace and cooperate with all with the same objective.

The Speaker of Iranian Parliament Ali Larijani has left Tehran for Istanbul to attend the 11th plenary session of the Asian Parliamentary Assembly (APA).

Local officials in Iran announced that all elements behind the September terrorist attack in the southern province of Khuzestan have been arrested.

The United States imposed “cyber-related” sanctions on two Iranians, according to a notice posted on the US Treasury website on Wednesday.

The Iranian Navy has launched a domestically-built destroyer in the southern port city of Bandar Abbas.

Myanmar’s authorities have intercepted a boat with 93 Rohingya Muslims who were fleeing apartheid conditions at internal displacement camps in Rakhine State and heading to Malaysia.

11th round of Syria peace talks opens in Astana

The 11th round of Syria peace talks, known as the Astana Peace Process, began in Kazakhstan on Wednesday.

A deputy head of Lebanon’s Hezbollah resistance movement says the US dream of restoring its lost power in the Middle East in cooperation with Saudi Arabia will never come true.

The Hezbollah resistance movement has issued a warning video to Israel, saying that the regime will “regret” invading Lebanon.

A new report says Crown Prince Mohammed bin Salman, known as MbS, has scrambled the Saudi military fearing a coup by some royals to topple him.

Some countries are trying to harm Iran by manipulating the oil market, Iranian Oil Minister Bijan Zanganeh said on Wednesday, according to the semi-official Mehr news agency.

France and Germany are to take joint responsibility for an EU-Iran trade mechanism to minimize the risk of U.S. punishment but few now believe it will cover oil sales, heightening fears for the fate of the landmark international nuclear deal with Iran.

The Sixth International Conference of ‘Halal’ products was held in Istanbul, Turkey, with representatives from the Iranian National Standards Organization.

Imports of Iranian crude oil by major buyers in Asia hit a five-year low in October, as China, Japan and South Korea sharply cut purchases ahead of U.S. sanctions on Tehran that took effect in early November, government and ship-tracking data showed.

Despite the fact that US sanctions have brought about problems and limitations for supplying fuel for Iranian aircraft, but flights are still running, Chief Executive of Iran Civil Aviation Organization said.

Global soccer body FIFA has been urged by its own human rights advisory panel to give Iran a deadline for allowing women to watch soccer matches.

Syrian feature film “The Father” has collected the Best Screenplay Award at the ending ceremony of the International Resistance Film Festival in Tehran.

Sohrab Sepehri was an Iranian poet, author and painter. He was one of the most important contemporary poets of Iran and his poems have been translated into many languages such as English, French, Spanish and Italian.