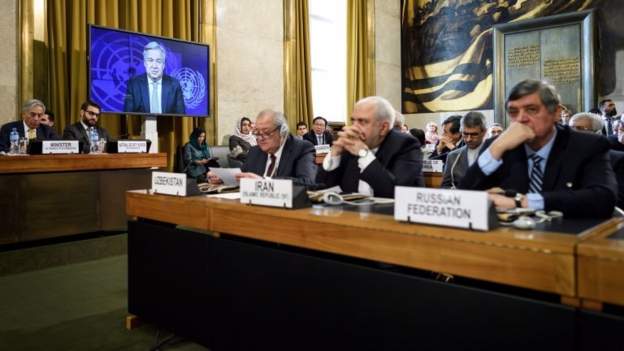 Consensus in Geneva: No military solution in Afghanistan

December 2, The Iran Project – Iranian Foreign Minister Mohammad Javad Zarif participated in the international conference on Afghanistan sponsored by the United Nations in the Swiss city of Geneva past week (Nov. 27-28). He also conferred with a number of international political figures on the sidelines of the event.

The conference was held by co-hosting of the United Nations and Kabul government with participation of senior officials from more than 60 countries and many representatives from international organizations.

Zarif calls for ‘inclusive’ dialogue’ in his speech

Addressing the Geneva Conference on Afghanistan, the Iranian foreign minister called on the international community to engage the Taliban in an “inclusive” dialogue with the Afghan government in a bid to restore peace to the war-torn nation.

“All of us need to facilitate the intra-Afghan dialogue, by helping to bring the Taliban to the negotiating table with the government for inclusive and comprehensive talks,” Zarif stated.

It should be noted that the group were not present at the high-level conference, but it was reported that they would closely monitor the gathering of Afghan leaders and international diplomats.

In his speech, the top Iranian diplomat pointed to the “old and new challenges” facing Afghanistan, and warned of efforts to spread extremism across the country.

“The presence of foreign forces has never brought stability in our region and has historically provided a recruiting ground for extremists,” Zarif noted, touching upon the long-time presence of US and NATO forces in Afghanistan, which has failed to restore security to the country 17 years after the US invasion.

“No military solution in Afghanistan”

During the meeting prior to the conference, Zarif and  Abdullah discussed different aspects of bilateral relations, exchanging views on the latest developments in Afghanistan including peace process and fighting terrorism.

Zarif has also had a meeting with Afghan president.

The latest developments in Afghanistan and its government’s plans to advance the peace process, issues related to bilateral relations, including the progress of the work of the joint technical committees of the two countries, issues relating to water management, security cooperation in the fight against terrorism and insecurity were the focus of the meeting between Zarif and Ashraf Ghani.

According to the official website of Iranian Foreign Ministry, in a meeting with the UN High Commissioner for Human Rights, Zarif referred to Iran’s reliance on its domestic public support as the only sustainable factor in preserving its national security, and said respecting the principles of human rights is not only an ethical commitment but also a national security requirement.

Zarif then expressed regret over the instrumental use of the concept of human rights and the abuse of the UN’s human rights mechanism as a means of exerting pressure on independent states.

The top diplomat also denounced any arbitrary issuance of human rights resolutions against the Islamic Republic.

Ve then took a jab at the unilateral, illegal and brutal sanctionsimposed by the US against the Iranian people, and described it as a stark violation of human rights. He also appreciated the good stances of the UN’s special rapporteur on unilateral coercive measures.

In a meeting, Zarif and Mauer exchanged views on mutual cooperation in Yemen, Syria and Afghanistan.

arif once again expressed Tehran’s preparedness to take part in humanitarian projects in the mentioned countries.

The two sides also discussed the US unilateral food and medicine sanctions on the Islamic Republic of Iran and stressed the need for international bodies to step into the fray to end the sanctions.

During a meeting with Francis Gurry, touching upon Iran’s plans to move from oil-based economy toward a knowledge-based one, Zarif highlighted the role of intellectual property in this regard.

Elsewhere, he went on to add that unilateral measures and illegal sanctions are among the main factors which damage and hinder the development of countries, especially in the realm of science and technology.

For his part, Gurry gave a brief report on the latest activities of WIPO, also pointing to the future challenges that the world will face in this area.

Mogherini underlined need for continued full and effective implementation of the Iran nuclear deal by all parties, “including the economic benefits arising from it”, it said.

Zarif in a meeting with his German counterpart Heiko Maas discussed mechanism taken by Europe to facilitate economic exchanges with Iran.

During the meeting both sides discussed bilateral relations, the latest development with regard to Europe mechanism to facilitate economic relations with Iran and regional development.

Foreign ministers of Iran and Sweden met in Geneva and discussed regional issues and Sweden’s efforts to settle Yemen crisis.

According to the report of Foreign Ministry Public Diplomacy and Media Center, Iranian Foreign Minister Mohammad Javad Zarif and his Swedish counterpart Margot Wallstrom also exchanged views on international issues and priority of human rights dialogue instead of selective measures in international organizations as well as other issues of mutual interests.