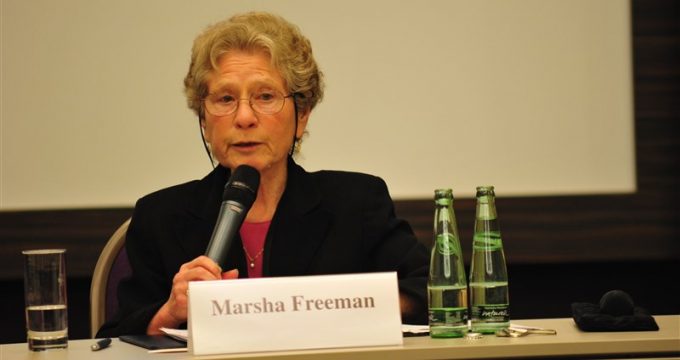 EU payment system not to address major issues in trade with Iran: US author

Tasnim – An American author cast doubt over the practicality of the Special Purpose Vehicle (SPV), a special payment channel created by Europe as part of its efforts to keep trade flowing with Iran in defiance of the US sanctions.

“I think it is possible that this proposed Special Purpose Vehicle may come into being, but it does not solve any of the real problems. There are practical as well as political considerations on the part of the Europeans. On the practical side, at 14 million barrels per day, the European Union is the largest importer of oil in the world. It is not about to restrict the number of countries it can buy from,” Marsha Freeman told Tasnim.

Marsha Freeman was born in New York City and was educated at Queens College and Columbia University. She is the author of hundreds of articles on the US space program and has been published in Fusion Magazine, Executive Intelligence Review, 21st Century Science & Technology, Acta Astronautica, Space World, New Federalist newspaper, Science Books & Films, Space Governance Journal, The World & I, Quest, The Encyclopedia of the Midwest, and many other periodicals. In 1993 she authored the acclaimed book “How We Got to the Moon: The Story of the German Space Pioneers” and then in 2000 she authored “Challenges of Human Space Exploration.” She has been a witness before the United States Congress at hearings on science, energy, space, and transportation budgets and policies.

Tasnim: On Sept. 25, the European Union, in a major snub to the United States, decided to set up a new mechanism to enable legal trade with Iran without encountering US sanctions. Recently, France and Germany said they will likely host the new system known as the Special Purpose Vehicle (SPV). Do you believe that this payment system will finally become operational despite Washington’s ongoing pressure?

Freeman: I think it is possible that this proposed Special Purpose Vehicle may come into being, but it does not solve any of the real problems.  There are practical as well as political considerations on the part of the Europeans. On the practical side, at 14 million barrels per day, the European Union is the largest importer of oil in the world. It is not about to restrict the number of countries it can buy from. On the political side, the EU has continued to support the Iran nuclear agreement despite the American withdrawal and is politically opposed to the sanctions. Only days after President Trump announced the sanctions, the IAEA once again confirmed that Iran was meeting the terms of the agreement. At least a number of break-away nations in Europe will not follow the US policy of sanctions. Even President Trump realized the impracticability of his policy, exempting eight countries from the oil sanctions for eight nations, for reportedly 180 days.

Tasnim: Washington has said it wants to cut Iran’s oil exports to zero. Is it possible at all?

Freeman: In addition to the stand of the European Union on sanctions, China and Russia have made clear that they will not cut oil imports from Iran. In addition, Russia has offered to help Iran sell its oil, so going to zero is doubtful. Great global energy insecurity has been introduced by this US sanctions policy.

Tasnim: Do you think Iran will reap the full benefits of the 2015 nuclear deal after President Donald Trump’s unilateral decision to leave it?

Freeman: The full benefits from the Iran nuclear deal are not possible unless the US changes its policy. There have been some sanctions lifted by some countries, but others have observed the sanctions. The direction for Iran that would circumvent the destructive policies, would be to join with China and the dozens of countries in Asia, Central Asia, the Middle East, through Eastern Europe, to Western Europe, to build the transport and energy infrastructure along what was the ancient Silk Road. Here, Iran’s culture and history can make a unique contribution, by participating in the great projects now underway.

Tasnim: US officials have defended the re-imposition of sanctions on Iran, saying the new bans do not target ordinary people. This is while US Secretary of State Mike Pompeo, in a recent interview with the BBC, said Iranian officials must listen to Washington “if they want their people to eat.” What do you think?

Freeman: It is impossible that citizens in Iran would not be affected by the sanctions. The drop in oil exports and revenue must result in cutbacks in imports, which are needed for consumer goods, as well as investments in the petroleum industry, and infrastructure. If the US sanctions not only stop the trade of its domestic companies, but third countries follow suit, it will have a dramatic effect on ordinary people. New economic arrangements, through the Belt and Road Initiative, can set Iran on the road back to growth.