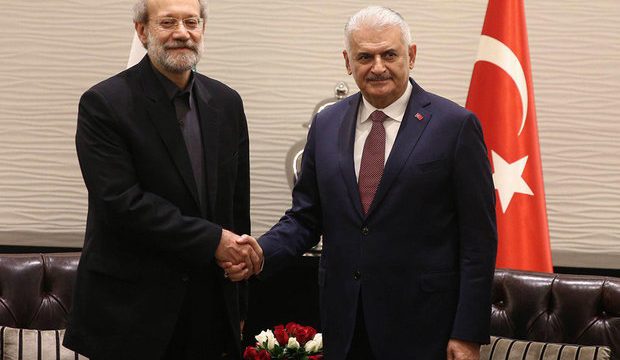 MNA – Parliament speakers of Iran and Turkey met Thu. in Istanbul, stressing the need for the realization of $30 billion worth of bilateral trade between the two sides in the face of US sanctions.

During the meeting, Larijani condemned Washington for using the dollar as a ‘cold weapon’, saying the move has prompted all countries to mull replacing dollar with their national currencies in bilateral trade.

Larijani maintained that the US is creating insecurity in the region and pursuing the ‘Deal of the Century’ to cement the presence of the Israeli regime, voicing regret that some regional countries have already acquiesced to this fabircated regime either due to their ignorance of the US agenda, or because they are too weak to protest.

The Turkish parliament speaker, for his part, said the US part in currency fluctuations is a “warning” for regional countries and runs counter to international law.

“We never imagined that the US would one day use the dollar as a cold weapon, but after its agenda came to light, presidents of Iran, China, Turkey and Russia began discussions on national currency-based trade,” he added.

He noted that the US aims to prevent cooperation among countries by exerting pressure and imposing sanctions, adding that the holding of such sessions as the APA and other similar gatherings would counter the US measures and boost cooperation among nations.