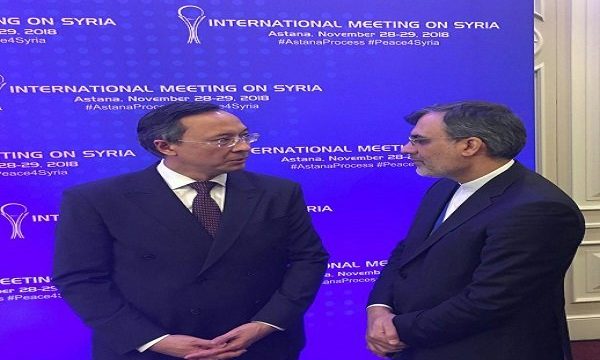 The Head of Iran’s diplomatic delegation to Astana talks Hossein Jaberi Ansari and Minister of Foreign Affairs of the Republic of Kazakhstan Kairat Abdrakhmanov conferred on the issues of mutual interest, on the sidelines of the last session of the 11th round of Syria peace talks in the Astana format on Thursday.

The first working day of the 11th round of Syria peace talks in Astana format kicked off in the Kazakh capital on Wednesday, with representatives of three guarantor states and Syrian opposition groups in attendance. The 2-day meeting is expected to focus on Idlib ceasefire, the establishment of Syria constitutional committee and release of prisoners.