A look at Iranian newspaper front pages on November 29

Iran Front Page – IFP has taken a look at the front pages of Iranian newspapers on Thursday, November 29, 2018, and picked headlines from 14 of them. IFP has simply translated the headlines and does not vouch for their accuracy.

Almost all papers today covered the remarks made by the Leader of Iran’s Islamic Revolution Ayatollah Seyyed Ali Khamenei in a meeting with a group of navy commanders.

Also a top story was the regional tour of Saudi Crown Prince Mohammed bin Salman, which was left unfinished after Morocco refused to host him, and people in Egypt and Tunisia held protest rallies against the prince. 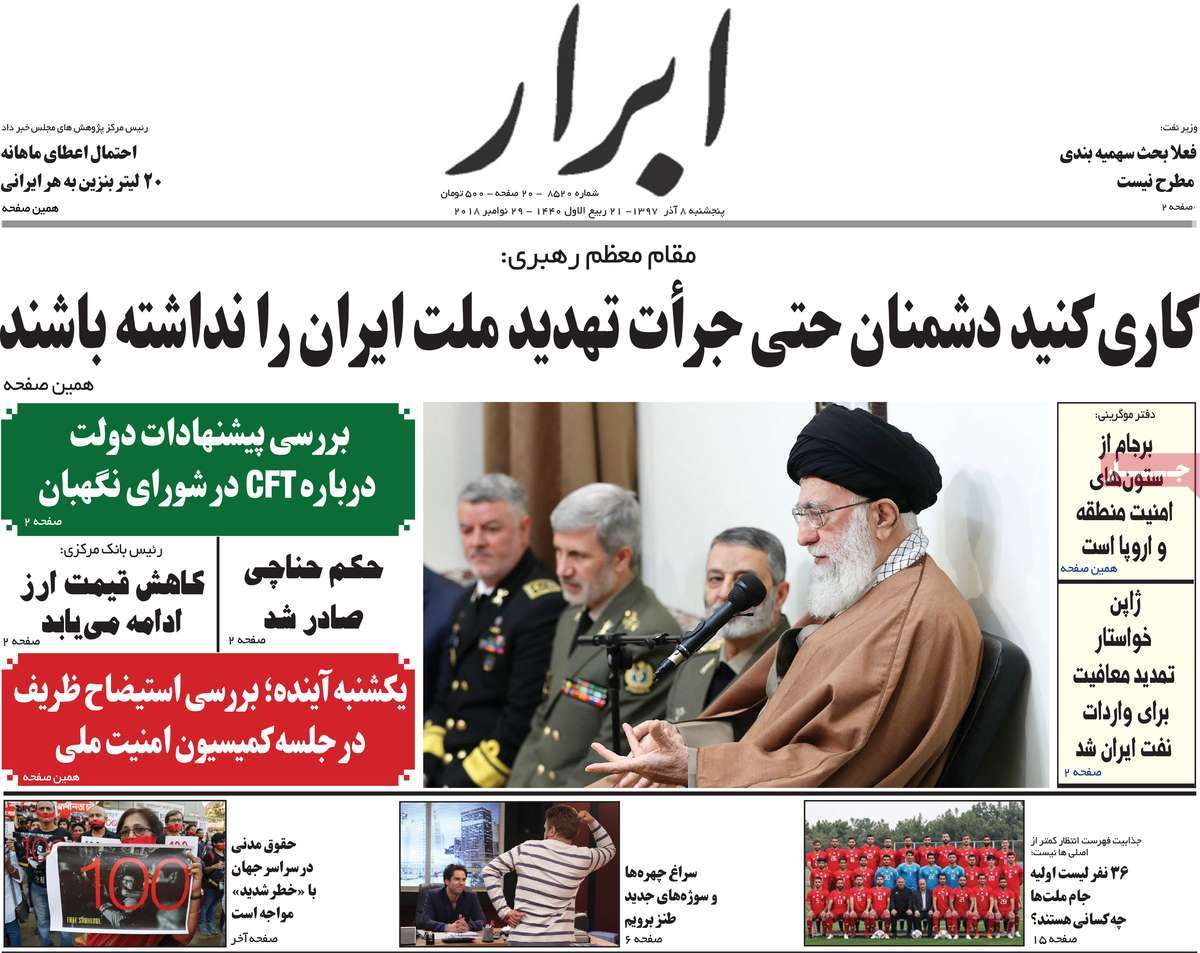 1- Amazing Source of Water Discovered in Zabol, Southeast of Iran
• The Source Can Supply Entire Country’s Water for 170 Years

2- Leader to Armed Forces: Deters Enemies from Even Threatening Iran 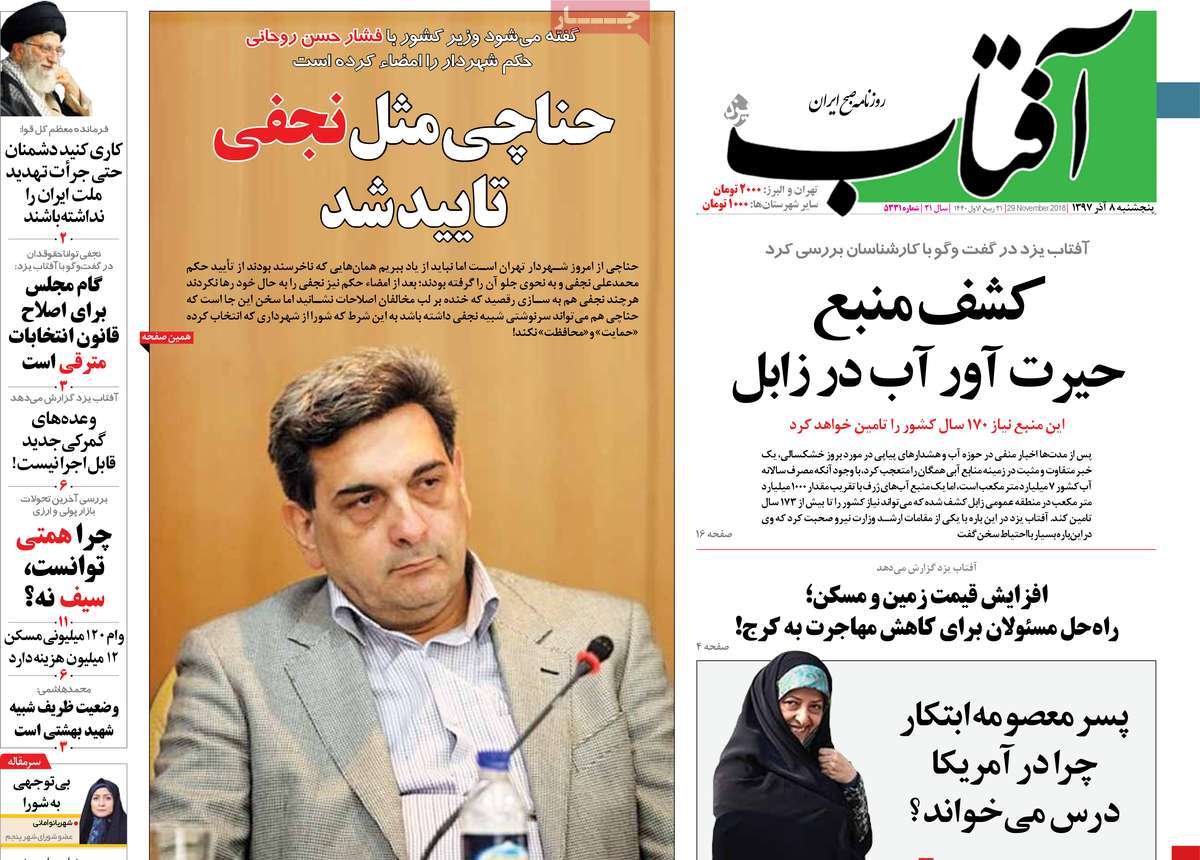 Arman-e Emrooz:
1- Bin Salman Trying to Get Out of Isolation [Editorial] 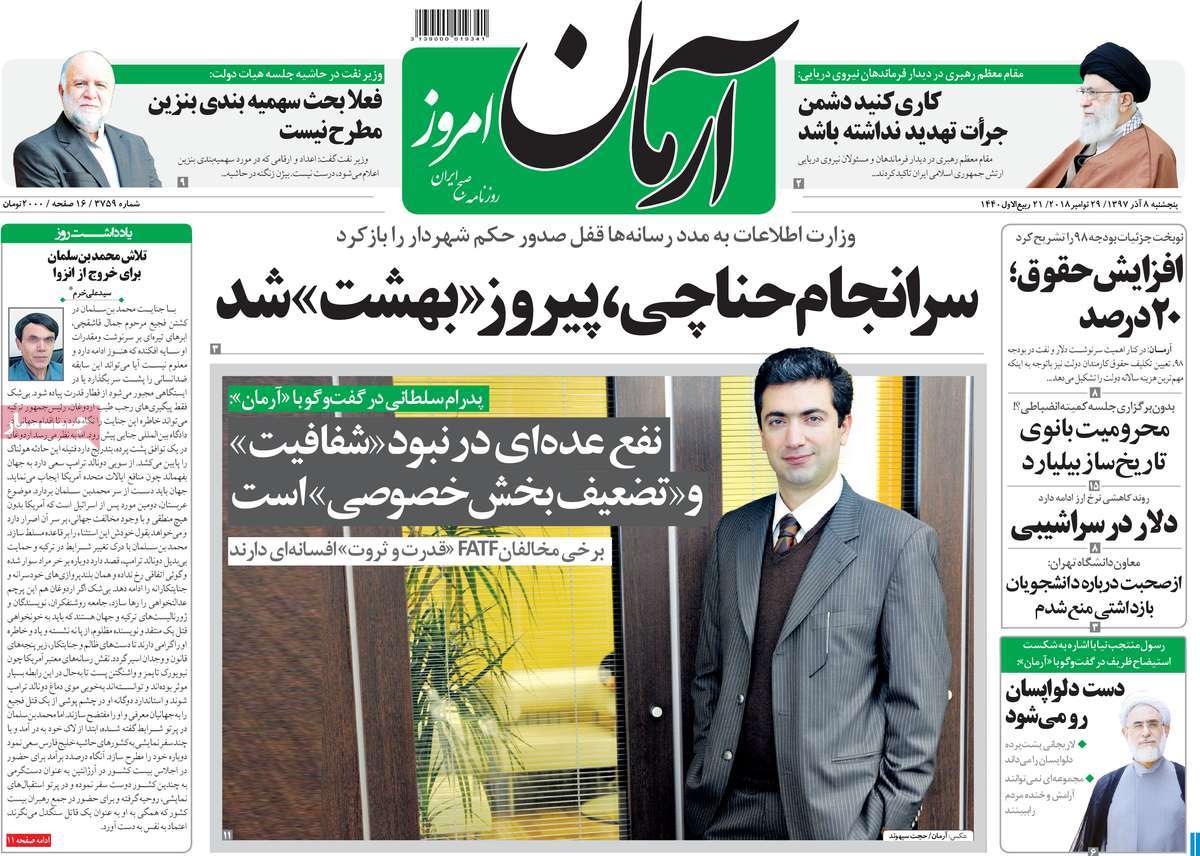 Ebtekar:
1- Expiration Date of Ambitious Plans
• Challenges Faced by Bin Salman in His Regional Tour ahead of G20 Summit

2- Preparedness of Armed Forces to Deter Threats against Nation: Leader 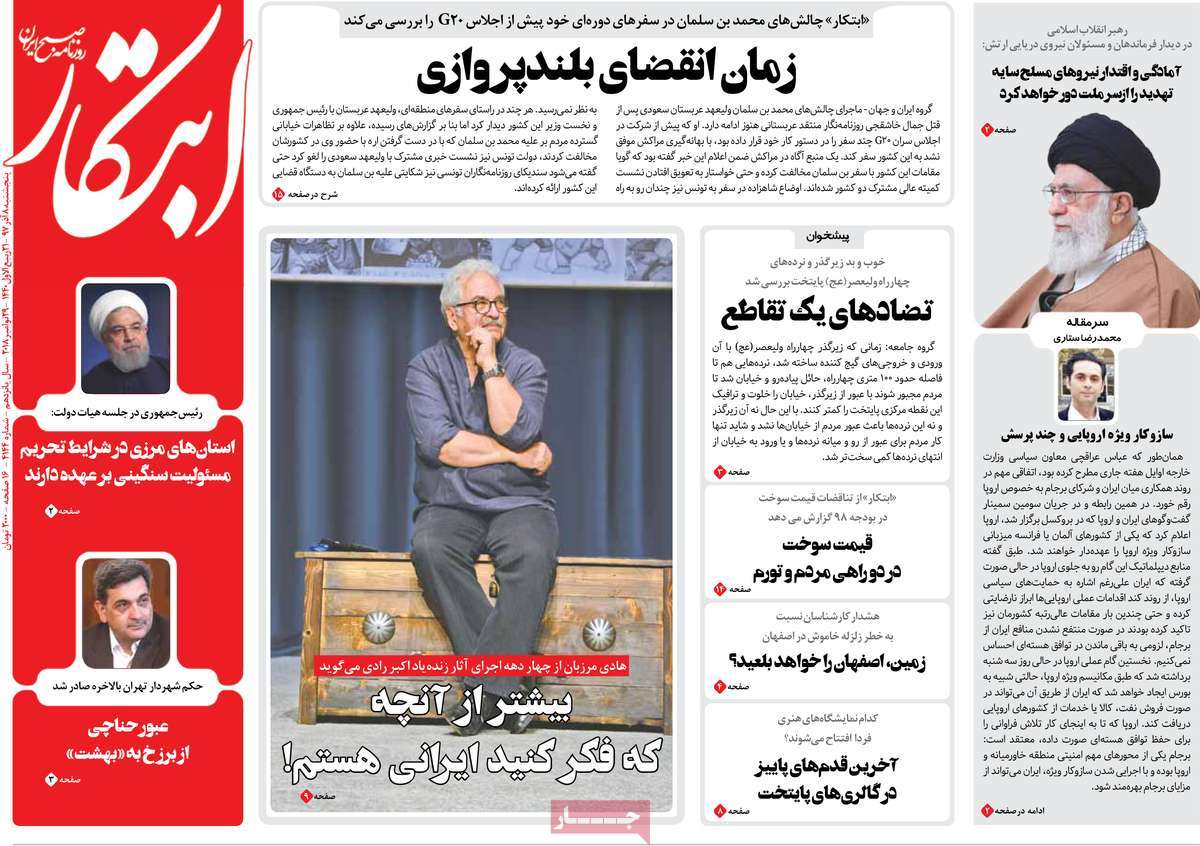 Etemad:
1- Hardliners Defeated in Their Bid to Impeach Larijani

2- A Report on Declining Forex Rates: Taming the Aggressive Horse 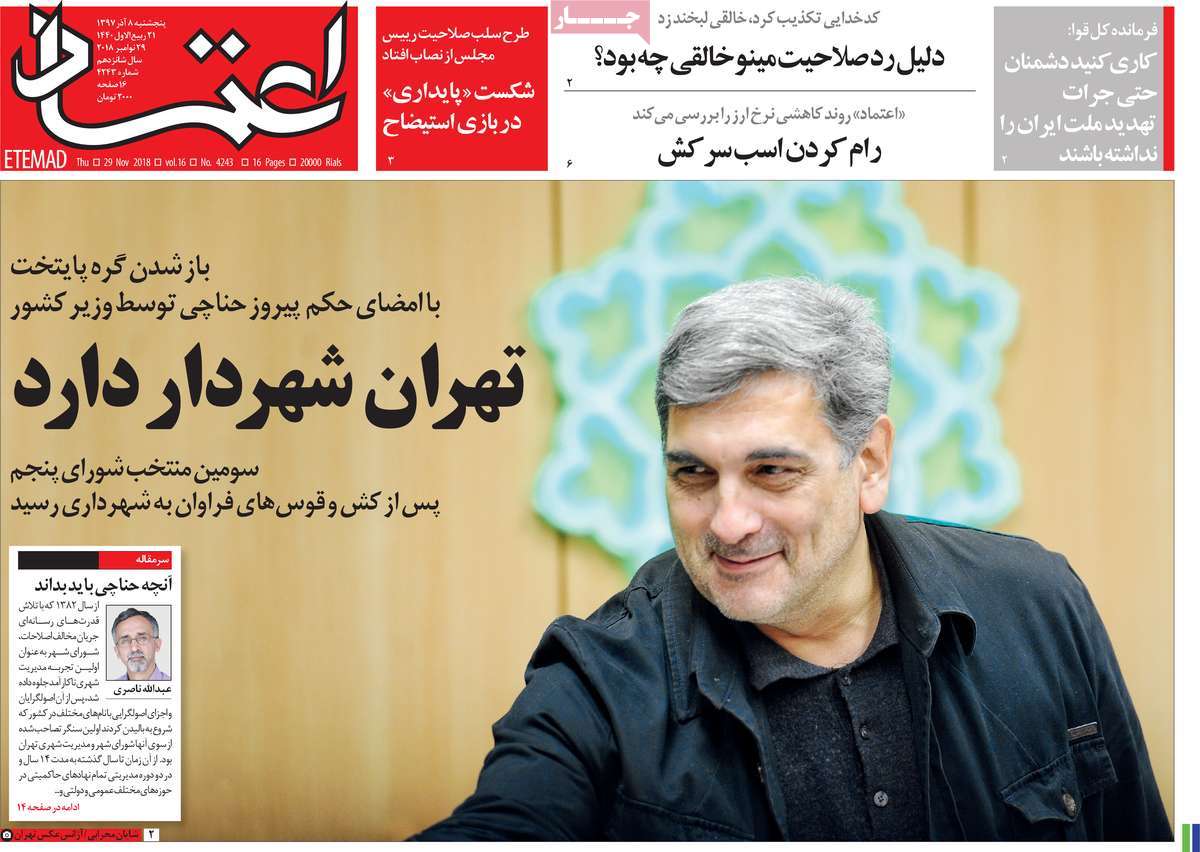 Ettela’at:
1- Iran Has No Intention of Waging War on Any Country: Leader

2- Ukraine President: We’re on Brink of All-Out War with Russia 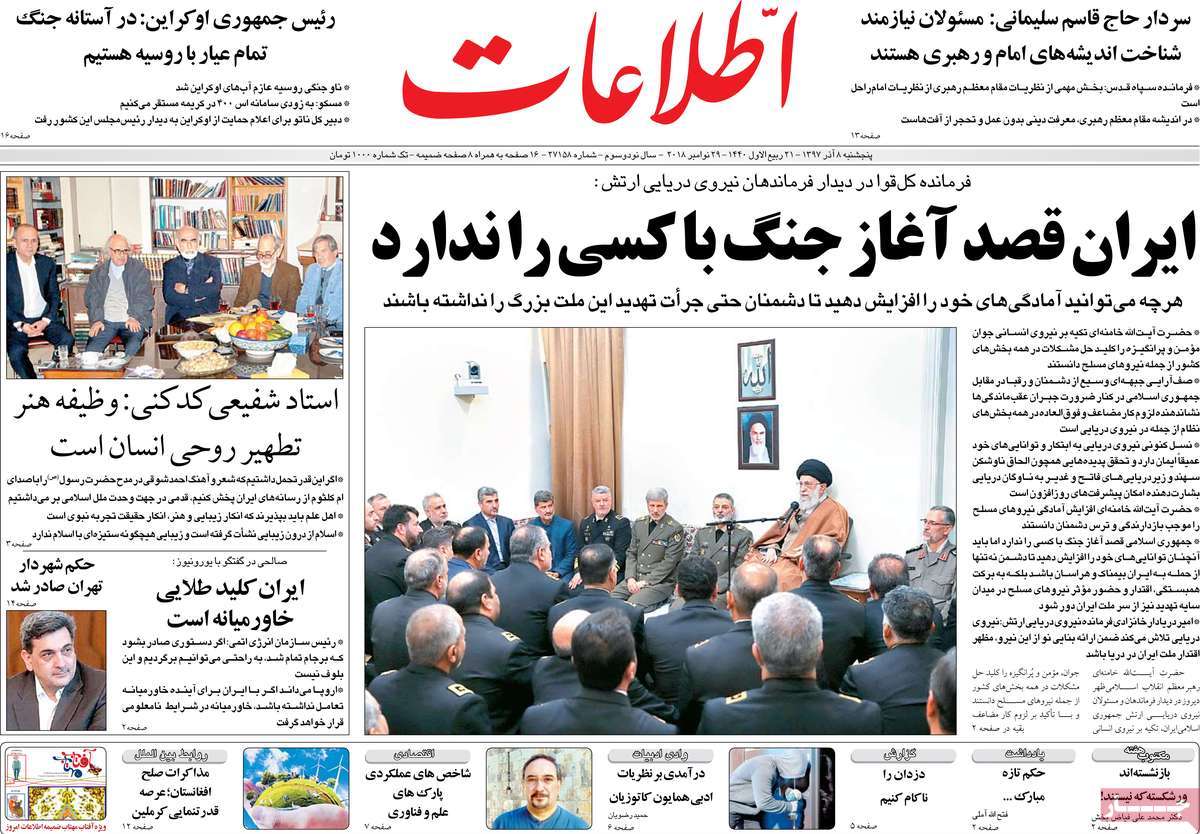 Haft-e Sobh:
1- Iranian Trick to Bypass Trump
• Families of Iranian Students in US Meet Them in Small Library 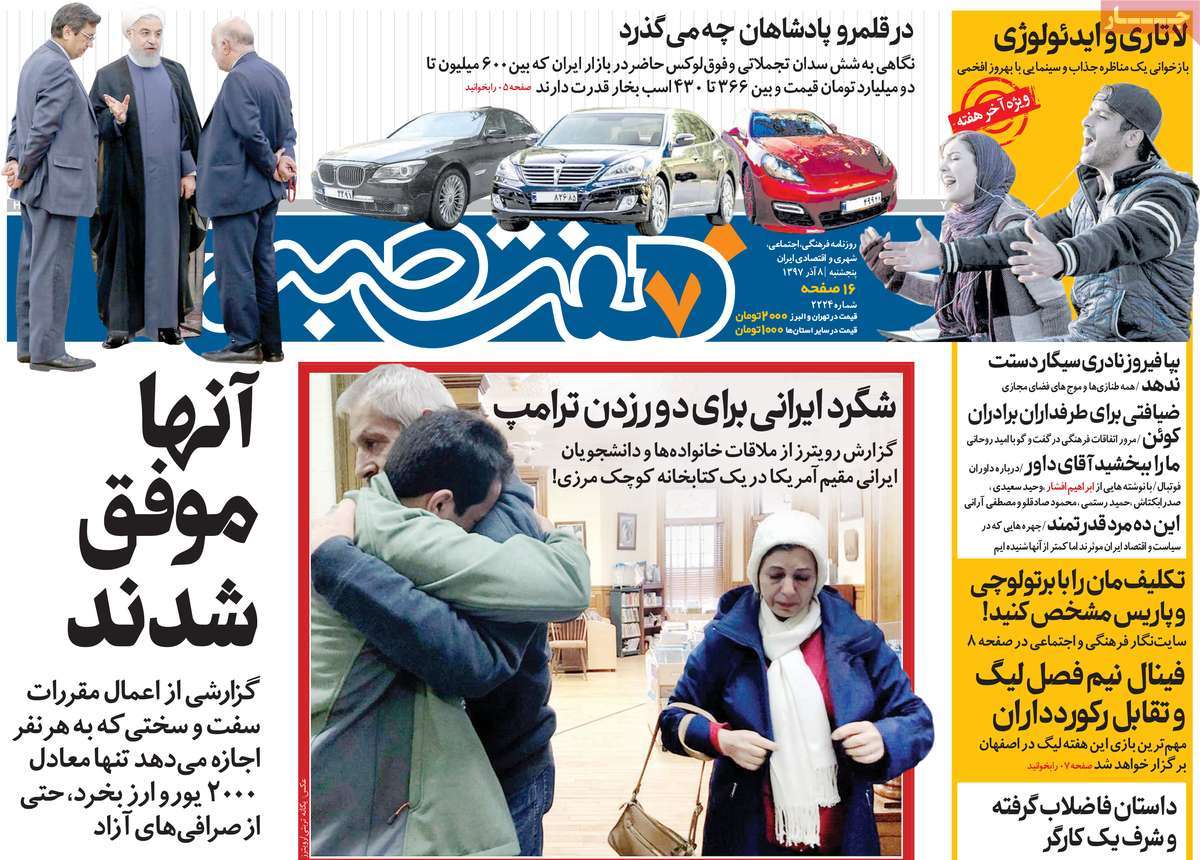 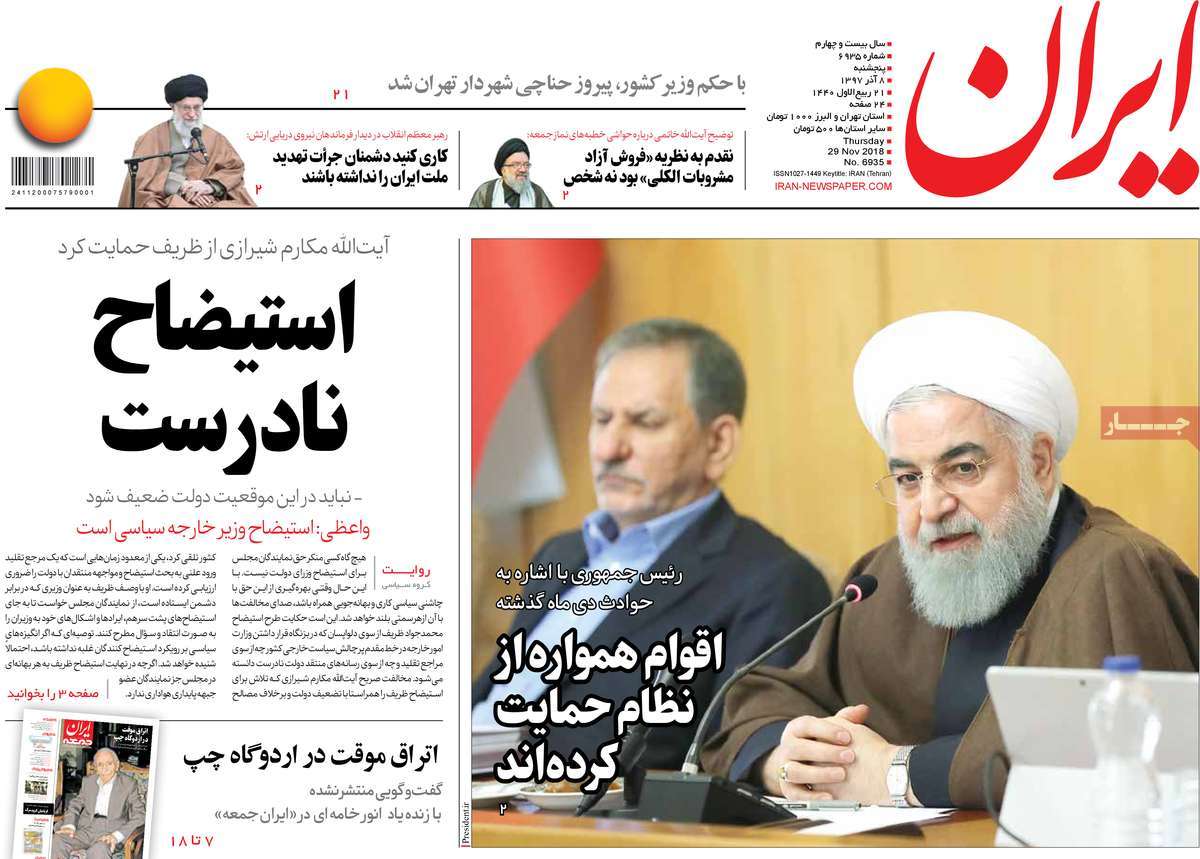 Javan:
1- US Fanning Flames of Ukraine-Russia Tension
• Washington Trying to Stop Europe from Moving towards Russia 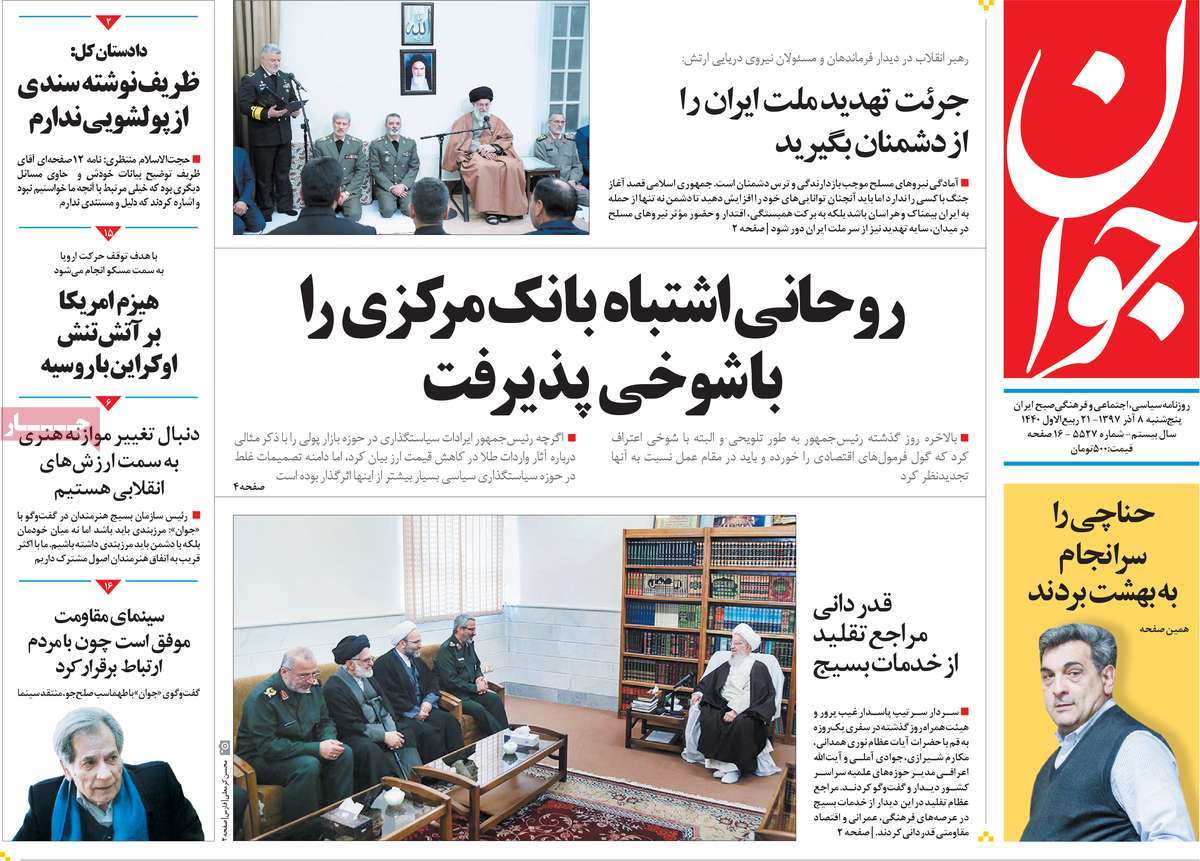 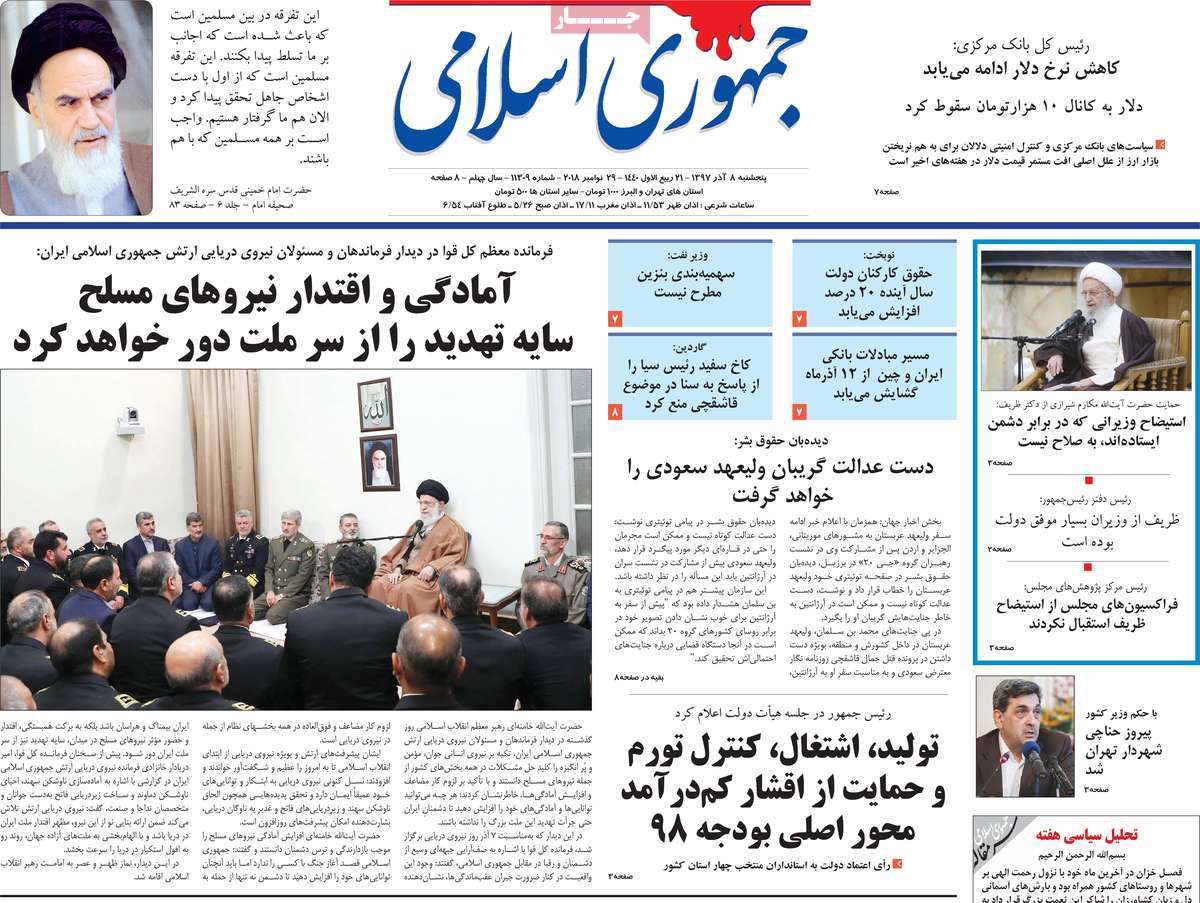 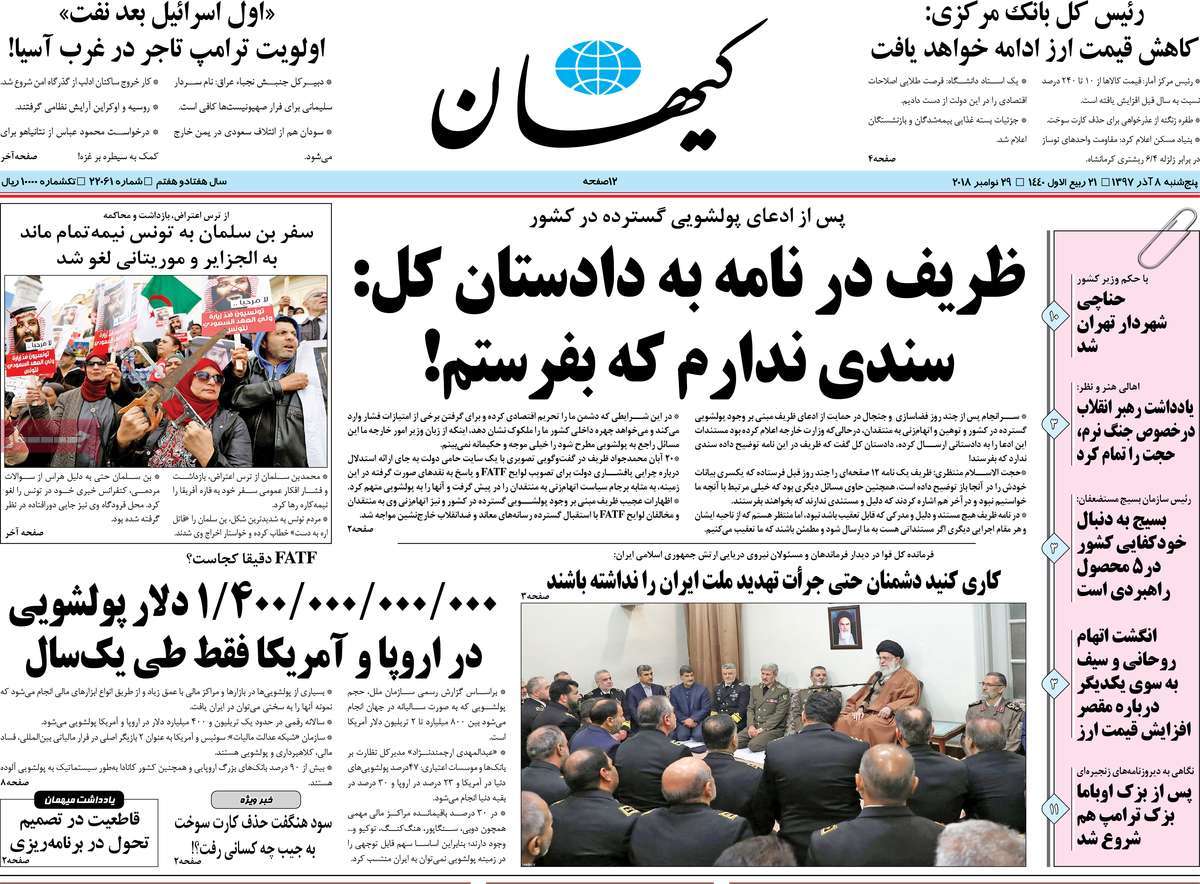 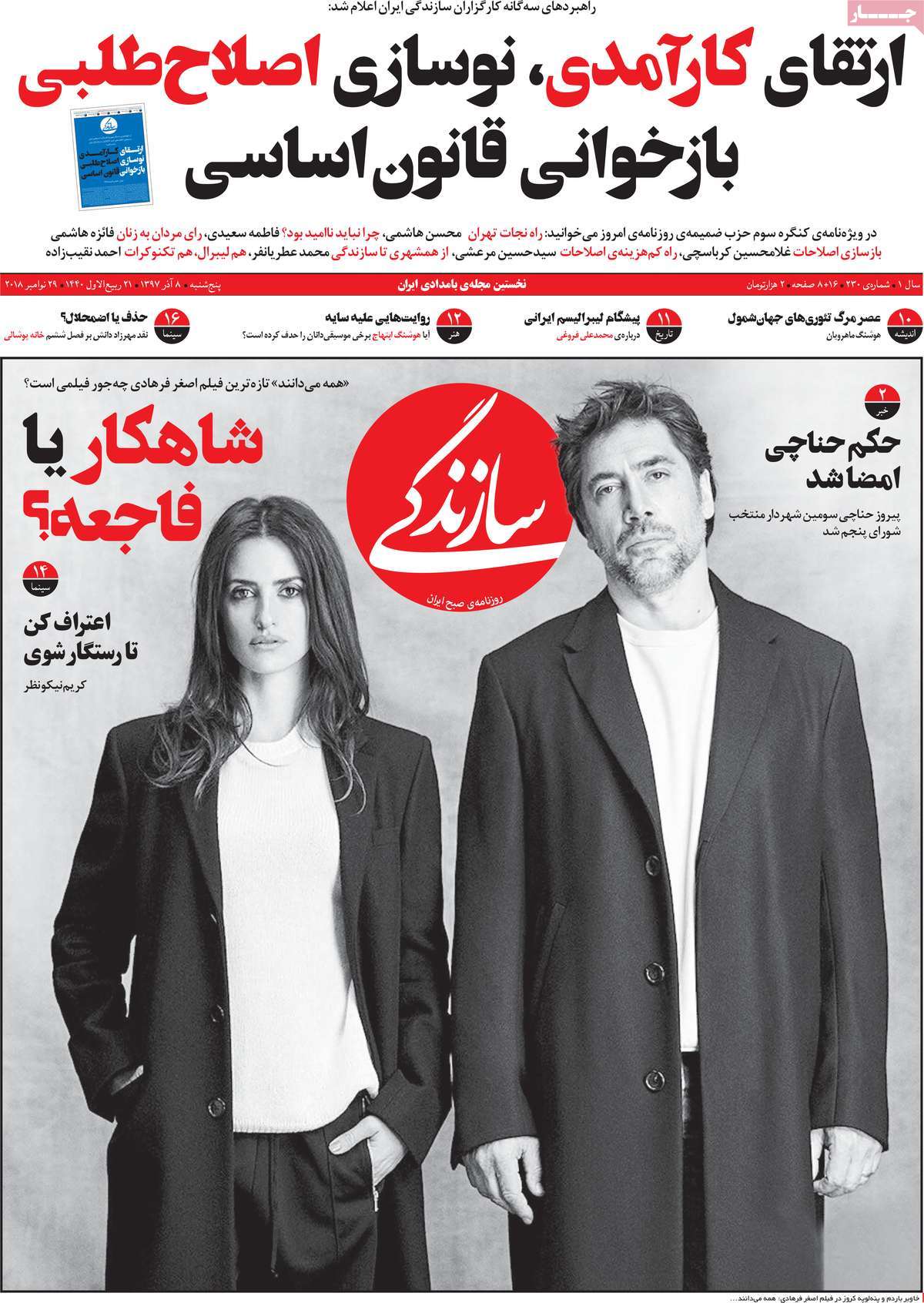 Shargh:
1- Zarif to Appear in Parliament on Sunday
• Ayatollah Makarem Shirazi: It’s Not Right to Impeach Ministers Standing against Enemy 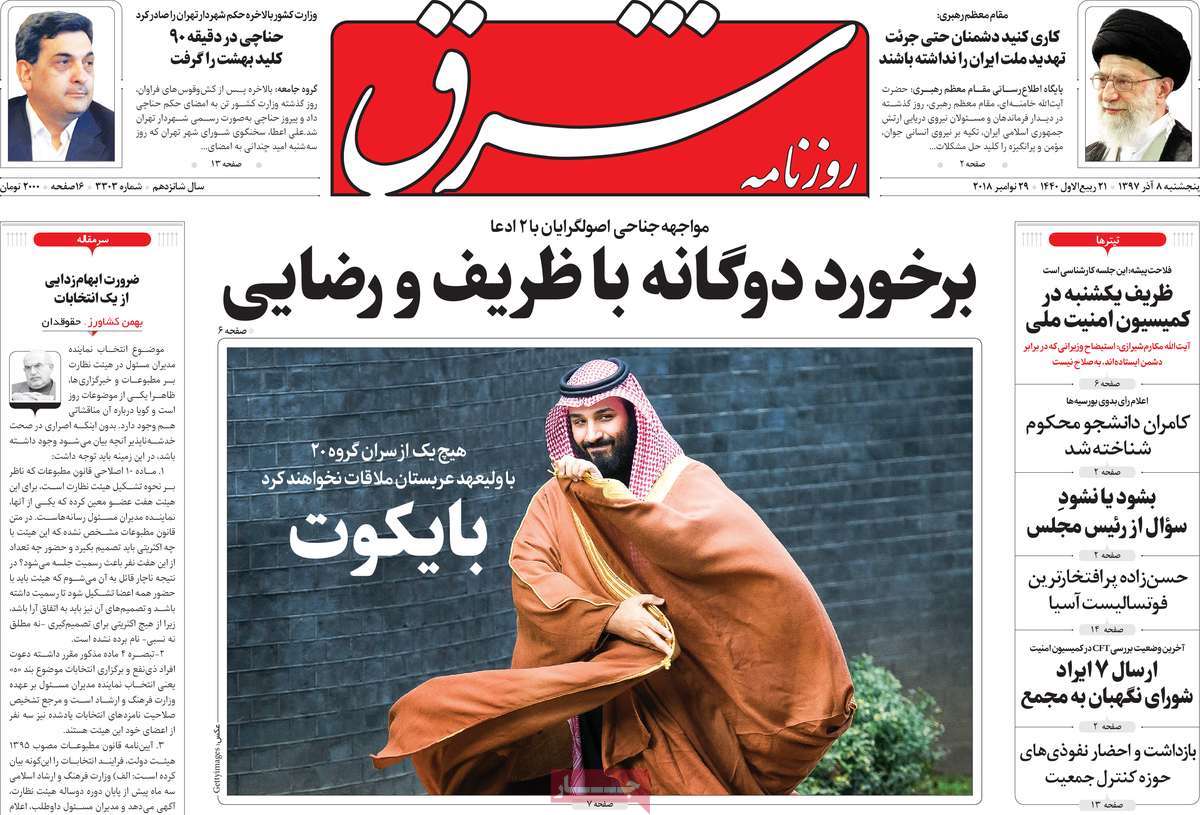 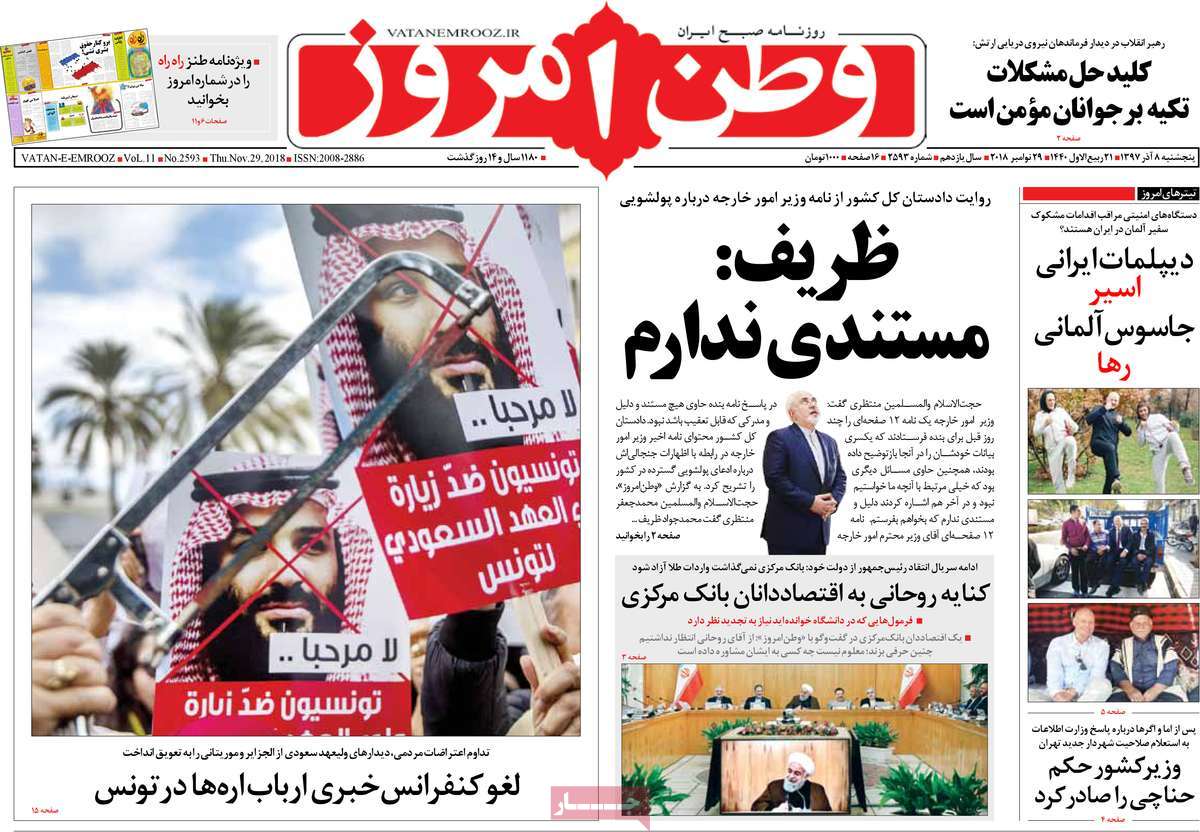