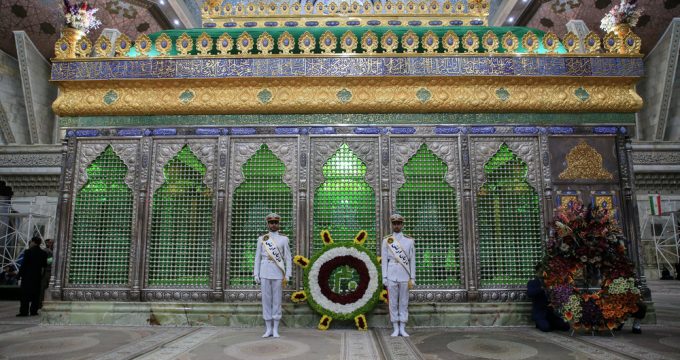 November 28, The Iran Project – Iranian National Navy Day, which this year falls on Nov. 28, commemorated with renewing allegiance with Imam Khomeini’s ideals by the Navy commanders.

On the occasion of Iran National Navy Day, the Navy commanders and personnel visited the shrine of Imam Khomeini in Tehran to renew allegiance with the ideals of the late founder of the Islamic Revolution.

Also on this occasion, Leader of the Islamic Revolution Ayatollah Seyyed Ali Khamenei received a group of the Navy’s commanders and officials.

Addressing the Navy’s officials, Ayatollah Khamenei said Iran does not intend to start war against any country, but the Armed Forces should “boost their preparedness as much as possible so that enemies of Iran would not even dare threaten this great nation.”

The Leader said the Armed Forces, especially the Navy, had made “great and astounding” progress since the 1979 Islamic Revolution.

“The current generation of the naval forces deeply believes in its own creativity and capabilities,” the Leader noted.

Prior to the Leader’s remarks, Navy Commander Rear Admiral Hossein Khanzadi addressed the gathering, reading out a report on the force’s most recent advancements.

The commander pointed to the preparation for operation of Sahand Destroyer, the overhaul of Damavand Destroyer, and indigenous manufacturing of Fateh Submarine.

Also on the sidelines of the cabinet meeting on Wednesday (Nov. 28), Iranian Defense Minister Brigadier General Amir Hatami announced that the country’s Naval forces will be equipped with two new home-made submarines and a destroyer soon.

He praised efforts made by talented and skillful Iranian engineers and navy experts, reminding that the two vessels have been designed and built at a time when Iran has been under harsh sanctions for four decades.