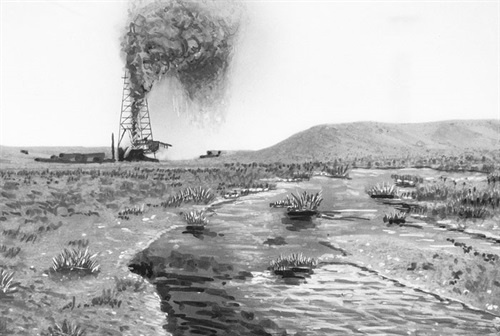 National petroleum; from beginning to end

SHANA — Born in 1908, Iran’s petroleum industry went through ups and downs during the first four decades of its life. Throughout a forty-year period, oil-rich areas had been discovered in southwestern Iran, oil activities had expanded throughout World War I (WWI) and Iran had experienced a new monarchy system. In the wake of the outbreak of WWII,…

Born in 1908, Iran’s petroleum industry went through ups and downs during the first four decades of its life. Throughout a forty-year period, oil-rich areas had been discovered in southwestern Iran, oil activities had expanded throughout World War I (WWI) and Iran had experienced a new monarchy system. In the wake of the outbreak of WWII, Iran saw transition of power from father to son. During those years, Iran’s oil production had exceeded 32 million tonnes a year. Oil-rich areas had turned into developed cities, which were envied by people living in other parts of the country.

For instance, in Abadan alone, such buildings and facilities as hospital, Taj Cinema, Armenian Church, German bathroom, Iran club, shopping center, Pakistani café where spicy food was served and a famous café were built. That indicated industrial development and prosperity, marking 40 years of discovery of oil in Iran. The end of deadly WWII led to the development of petroleum industry as well as political openness. Iranian politicians had time to think of national rights.

When Iran was occupied by Allied troops in September 1941, Iranians realized the nature of foreign governments, particularly the British. Political overture following WWII gave political groups and parties a good chance to flex muscles with their talks mainly focused on oil.

Another point was the presence of US companies in oil-rich countries in the Middle East region. Iran was hearing news of signature of lucrative deals between US companies and Arab petrostates. The 50-50 deal signed between Saudi Aramco and a US company struck a deadly blow to Britain’s four-decade-old supremacy in the region. That led Iranians to think of a higher share of their own wealth in their deal with Britain.

For the first time, an MP in the 15th National Consultative Assembly, Abbas Eskandari, suggested the idea of nationalization of the petroleum industry on August 20, 1948. On January 19, 1949, when the government was facing a censure motion, Eskandari submitted a plan for revising Iran’s oil concession. Eskandari’s efforts proved futile, but MPs in the next Assembly embarked on renewed efforts under the leadership of Mohammad Mossadeq. The advantage for them was the support offered by religious groups led by Ayatollah AbolQasem Kashani. Mossadeq and his allies in the Assembly finally managed to win approval for the motion on the nationalization of the petroleum industry. The Senate also moved to endorse the decision for fear of not giving cause to the recurrence of deadly incidents like those committed by the “Fadaian-e Eslam” group. On the final day of that calendar year, the law was approved and Iranians received their New Year gift on March 22, 1951.

But the Anglo-Iranian Oil Company (AIOC) did not sit idle. Under the pretext of low rentals and foodstuff prices, the company moved to cut wages and housing allowances.

AIOC’s unexpected move, which coincided with the time oil service workers were expecting to receive their bonuses, snowballed into a massive crisis. General strikes were declared across the country. The “Tudeh” party was involved in the organization of the strikes.

The strikes began in Mahshahr, but spread very quickly to all oil-rich areas. Masjed Soleyman, Aghajari, Naft Sefid and other oil-rich areas joined the industrial action. By April 1951, most of the 45,000-strong staff of AIOC were on strike. Oil production rate fell drastically, drawing angry reaction from Britain. Add to this expulsion of AIOC engineers from Iran. The key point is that Ayatollah Kashani had thrown his support behind political activists. Such unity continued for some time, but due to some misunderstandings and emergence of differences, which were quickly exploited by the government and foreigners, the movement for the nationalization of petroleum industry ended in failure.

An unpublished letter from Ayatollah Kashani indicates clearly the religious groups’ support for politicians in the establishment of National Iranian Oil Company (NIOC).

In a letter dated May 24, 1951 and addressed to a leader of the oil nationalization movement, Ayatollah Kashani wrote:

I hope you are all well. I am worried and stressed at an unlimited level. I hope that everything will end soon so that I would take a sigh of relief. What comes to my mind is that if they refuse to compromise, the wells have to be closed by force. Before that the company’s managers have to be expelled, their residence permits withdrawn and ordered to leave Iran within 48 hours.

Please give my regards to all friends, in particular Dr Amir Jalali and Mr. Bazargan. During the meeting which you must have heard about we decided to confirm it. If possible please give me call and let me know of the result.”

The content of the letter shows that the British had firmly resisted the expropriation decision and their resistance continued for more than two years. Over this time, Iran’s petroleum industry was entangled in political disputes instead of being involved in production and development.

After Mossadeq succeeded Prime Minister Hossein Ala following his resignation, Ayatollah Kashani repeatedly voiced his support for Mossadeq. Britain was angry at the unity of Iranians on the issue of nationalization of petroleum industry. To counter such unity, Britain filed a complaint with the International Court of Justice (ICJ). In the complaint, the British government claimed that the Iranian government’s oil nationalization scheme had squandered Britain’s capital and technical knowhow. It also accused Iran of having been ungrateful and noted that an agreement signed between the two sides had been violated.

The ICJ called on the parties to hold talks. In the meantime, the US sought to play a mediatory role between Iran and Britain with a view to winning concessions and guaranteeing its future interests.

Veteran American diplomat William Averell Harriman was sent to Iran to hold talks and leave for London. He recommended that the British government enter talks with Iran in order to minimize loss.

Britain’s then prime minister Lord Stokes travelled to Tehran in a bid to settle the dispute, but he failed.

After holding talks with the government of Iran, he met with the “Shah” of Iran. He warned the “Shah” that Iran would face embargo as Britain was powerful enough to remove Iran from global oil markets.

The “Shah” explained to him that the situation had spun out of control and that Iranians were by no means ready to give up their cause. Iran’s petroleum industry was in purgatory conditions.

Iran’s oil crisis sharply raised oil prices in the world. Arab states in the Persian Gulf and Saudi Arabia made maximum gains from the price hike to accumulate their currency reserves.

Winston Churchill was reelected prime minister in England, vowing to work for the collapse of Iran’s government in a bid to resolve the oil crisis. Iran’s economy was in distress and the government’s plan to issue bonds could no longer offer a solution to growing poverty.

Mossadeq sought to take a loan from the World Bank, but Britain intervened to block the move. The last wave of pro-Mossadeq demonstration was seen on July 20, 1952.

Mossadeq gradually lost his popular base due to discrepancies between oil nationalization movement leaders. And owing to US-Britain joint plotting, Iranians experienced their most tragic days in the summer of 1953. The August 18, 1953 coup was the culmination of a chapter that had opened to nationalize Iran’s oil industry. The attempt for a better use of oil wealth, taken from AIOC, finally played into the hands of Consortium.