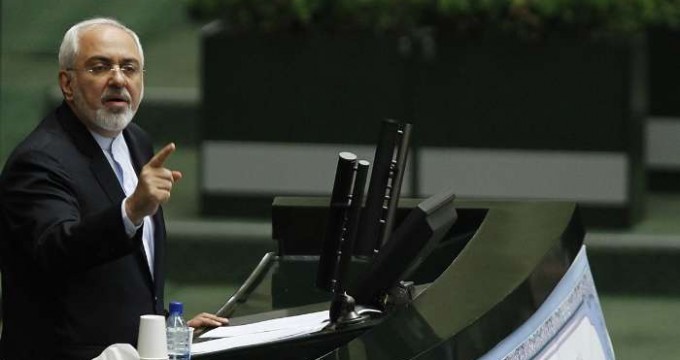 IFP – A senior conservative daily says the lawmakers’ efforts to impeach the Iranian foreign minister are not the right thing to do at this point in time.

The editor-in-chief of the conservative daily Javan has, in an editorial published Tuesday, spoken out against the possible impeachment of Iranian Foreign Minister Mohammad Javad Zarif by a group of right-wingers in the Parliament.

The full text of the opinion piece by Gholam-Reza Sadeqian follows:

Some lawmakers are seeking to collect signatures to impeach Zarif [and managed to do that later on Tuesday]. This is a futile, and at the same time detrimental move. Such an action lacks any proper timing, proper understanding of the subject, proper knowledge of the minister, and even proper knowledge of self (Parliament).

The legislators looking to impeach the foreign minister do not know what the right time is to impeach and grapple with the minister.

For one thing, we should pay attention to our status vis-à-vis the enemy. Today, Iran should show the world that if it faces enemies’ sanctions and restrictions, the country will demonstrate great flexibility in its domestic policy in order to achieve national unity and solidarity. Zarif has also come to adopt much better positions against Washington after he surprisingly saw that the US withdrew from the Iran nuclear deal (JCPOA). So, it is the wrong time for a quarrel. Now it is time to remain united against the US and Europe.

The signatories to the petition for impeachment have also failed to get to know the subject properly. The issue of Zarif is related to the JCPOA, not money laundering and the Financial Action Task Force (FATF). If one day someone wants to raise a question and another one wants to respond, they should all be related to the JCPOA. A change of the subject from the JCPOA to money laundering, if not an error and a strategic mistake, will create the wrong impression that those advocating impeachment may want to change the issue surrounding Zarif in order to remove the main issue altogether through a tactical move!

Supporters of impeachment do not know the minister well, either. The impeachment and possible change of the foreign minister is not similar to that of ministers of roads and labour as the president himself also wanted these two Cabinet members to be impeached. On the other hand, Zarif is not the same as what he was before the United States’ withdrawal from the JCPOA. You want to have the minister removed through impeachment, but the parliament should, instead, set the stage for Zarif to remain in office and for the government to make good on its promises with regards to the JCPOA and reap the benefits of interaction with the West in foreign policy. The parliament should not seek to remove Zarif and bring to power another person who has neither given any promises nor had any responsibilities and who would continue to do what Zarif did and parliament would sit idly by and simply watch! Lawmakers have lost the game to Zarif, whether or not they would manage to remove him.

If Zarif receives a vote of confidence, it will mean that the JCPOA has been victorious and the “rampant” money laundering claim has proven to be right. If Zarif is voted out of office, then the person who leaves the Foreign Ministry will turn into a national hero who “was making efforts,” but lawmakers did not allow him to continue.

And finally, advocates of impeachment do not know the parliament well, either. The tenth parliament has shown that it is not a decision-making parliament. Although the legislature is at the helm of affairs, but it is the MPs who should show that they understand what it means to be at the helm of affairs and appreciate it. The supposed removal of the foreign minister is not something to be done by the tenth parliament which takes photos with [EU Foreign Policy Chief Federica] Mogherini! Rather, it needs a parliament which, in terms of morality and politics and prudence and vote, represents thousands of years of culture and civilization of the Iranian nation.

Instead of making such useless moves, the parliament can make a few demands from the foreign minister: Mr foreign minister! From now on, leave domestic policy to those whose job is to deal with local policy. What we desire – with a little condoning – is the same Zarif which showed up at the Rome conference, not the one who is trapped in a website affiliated with the parliament speaker. Mr Zarif! We have problems with the US, not with Trump. While expressing your views, please direct your objections to the United States, not Trump. Mr Minister! Write on a piece of paper: “the US experience” and take it with you to Europe, and whenever you want to sit at the table with the Europeans, put that piece of paper in front of you in order to save yourself the trouble of repeating what has already been said.

Abandon attempts to impeach Zarif. He has walked side by side by John Kerry and the like, and has been praised over the JCPOA, and now he has lost the thing for which he was praised. With such experience, he is preferable to those who have neither gained or lost anything, nor walked along with any top figures. Now it is time for Zarif to respond to questions over the JCPOA issue, not to be removed over money laundering allegations.