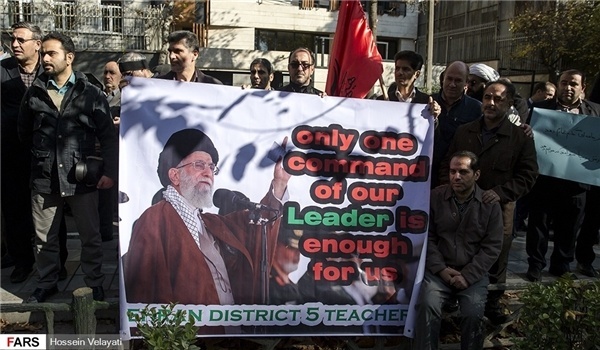 Iranian teachers call on UN to stop crimes in Yemen

FNA – Teachers from different districts of Tehran congregated in front of the United Nations (UN) office in Tehran to protest against the ongoing slaughter in Yemen, and voice their support for the war-stricken people of the Arab country.

Tens of teachers from different districts of Tehran gathered in front of the UN office in Tehran to protest the Saudi-led war on Yemen, holding placards in Farsi and English with words in condemnation of “Westerns’ support” for Saudi Arabia in the “unfair war” against Yemen.

The protestors called on the UN, as an international organization, to undertake measures to put an end to the deteriorating humanitarian crisis in Yemen.

Saudi Arabia and some of its allies, including the United Arab Emirates, Morocco, and Sudan, launched a brutal war against Yemen in March 2015 in an attempt to reinstall Yemen’s former president Abd Rabbuh Mansur Hadi.

The aggression initially consisted of a bombing campaign but was later coupled with a naval blockade and the deployment of ground forces to Yemen. Around 20,000 people have died since the war began, says Yemen’s Health Ministry.

The Saudi-led war has also taken a heavy toll on the country’s infrastructure, destroying hospitals, schools, and factories. The United Nations (UN) has said that a record 22.2 million Yemenis are in dire need of food, including 8.4 million threatened by severe hunger.

Despite Riyadh’s claims that it is bombing the positions of the Ansarullah fighters, Saudi bombers are flattening residential areas and civilian infrastructures.

In August, a Saudi air raid hit a school bus as it drove through a market in the town of Dhahyan in Sa’ada Province in Northwestern Yemen, killing a total of 51 people, among them 40 children, and injuring 79 others, mostly children.

According to several reports, the Saudi-led air campaign against Yemen has driven the impoverished country towards humanitarian disaster, as Saudi Arabia’s deadly campaign prevented the patients from travelling abroad for treatment and blocked the entry of medicine into the war-torn country.