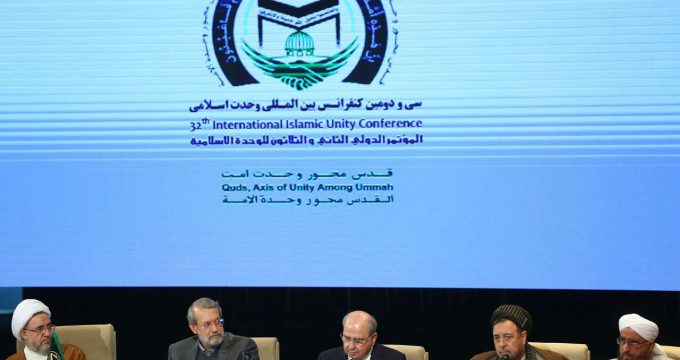 Press TV – Iranian Parliament Speaker Ali Larijani says the United States plans to make Israel a dominant force in the Middle East through its ‘deal of the century’ plot, but Iran is determined to foil it.

“The so-called ‘deal of the century’ is an Israeli-American plot,” Larijani said in a Monday address to the closing ceremony of the Islamic Unity Conference in Tehran.

“We will stand against the Israeli regime and won’t let the deal take place in this region,” he went on to say.

“They have called it the ‘deal of the century’ to achieve a number of major goals. Their first goal is to increase the power of Israel in the region. … The other goal is to end the story of Palestine by telling Palestinian refugees to stay in other countries and not to return to their homeland,” Larijani said.

He further noted that the United States has a serious plan to plunder the region’s oil resources and accuses Iran of misbehavior in order to only justify their presence in the Middle East and encourage regional countries to buy their weapons.

“They target Iran because it is the only country that has stood against Israel and America and has maintained its position for 40 years,” he said.

Larijani warned certain countries in the region against supporting the so-called ‘deal of the century’ and hosting Israeli officials, saying that such moves won’t have any benefit for them.

He said Saudi Arabia, the UAE, and some other countries admit they made a mistake when they supported former Iraqi dictator Saddam Hussein in his eight-war war against Iran. “We overlooked that mistake and did not retaliate, but their second mistake – supporting Israel – wouldn’t remain without retaliation.”

Iran won’t let countries that are siding with the US and serving the Israeli regime by supporting the ‘deal of the century’ achieve anything, he warned.

“You are the leaders of Muslim countries, but know it that we’ll stand against Israel, and won’t let the ‘deal of the century’ happen in the region,” Larijani noted. “People never forget the issue of Palestine. Their governments may say something for their own interests or to appease the US; they may remain silent or establish ties with Israel. But their people hate it. The people of the region in any country consider Israel as a cancerous tumor, and hate it.”

The so-called deal, a backchannel plan to allegedly reach a peace settlement between Israel and the Palestinians, was proposed by the US administration late last year. Although the plan has not been released, leaks signal it will consist of the same tried and failed ideas.

While little is known about the controversial deal, leaks have suggested that it regards Jerusalem al-Quds entirely as Israeli territory, whereas Palestinians view the eastern sector of the occupied city as the capital of their future state.

Palestinians also believe that the US-drafted plan calls for keeping borders and security under Israeli control, while it keeps Israeli settlements’ final borders to be discussed in later negotiations.

Earlier this month, Palestinian President Mahmoud Abbas rejected the plan and decried what he called efforts to separate the West Bank from the Gaza Strip.

“The ‘deal of the century’ will not pass and the fate of the land of Palestine will be decided by the Palestinian people,” Abbas said in a recorded speech aired on Palestine TV on Nov. 10.

Abbas has described US President Donald Trump’s plan as “the slap of the century” and boycotted the US administration since December 2017 when Trump recognized Jerusalem al-Quds as Israel’s capital.

In Gaza, Hamas official Sami Abu Zuhri said the resistance movement would never allow the “deal” to be implemented.

He said weekly protests held near an Israeli fence separating the occupied territories from Gaza would be held with the aim of thwarting the “deal of the century.”