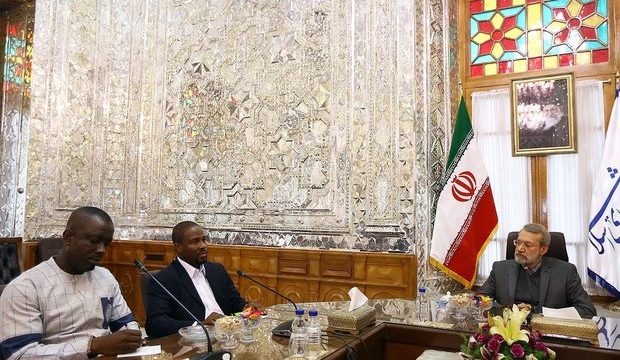 During a Monday visit by Abdul Aziz Muniru, the head Iran-Ghana parliamentary friendship group, Larijani said the Islamic Republic is keen on using the great capacities of Ghana in the agricultural sector in a bid “to push the government’s plans on farmland investment overseas”.

He added that Iran is also eyeing the opportunities to invest in the African country’s oil and gas industry.

Saying that Ghana has always been a close friend and supporter of Iran in the international arena, the official expressed hope that the two countries broaden the scope of their bilateral collaborations.

According to him, the two countries have exchanged many delegations after the implementation of Iran’s nuclear deal in 2016 (known as JCPOA). “Necessary actions should be taken” to make the mutual plans come into fruition, he said.

Muniru, who was heading a parliamentary delegation from Ghana, expressed gratitude toward Iran for making every effort to deepen relations with his country.

According to him, the Ghanaian government has provided several incentives, including tax exemptions, for foreign firms investing in Ghana’s Islamic regions, which could suit Iranian companies and contractors.

Iran and Ghana share a longstanding history of friendly relations. Iranian officials have already said they are planning cultivation in Ghana whose agricultural sector accounts for over half of the African nation’s gross domestic product and is the world’s second largest cocoa producer.