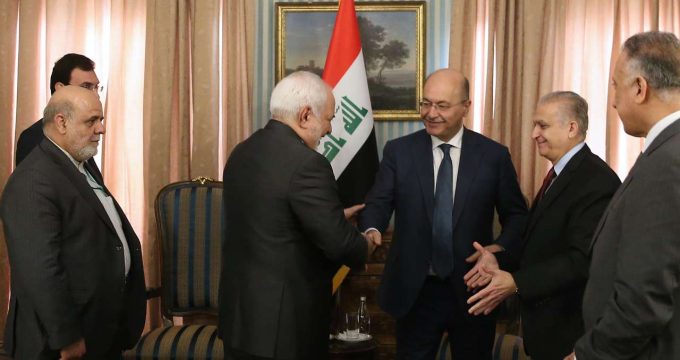 Iran-Iraq relations in light of US sanctions

Al Monitor | Bijan Khajehpour:The reimposition of US secondary sanctions has compelled Tehran to look for ways to reduce their negative impact. According to Iranian officials, one of the strategies is to increase trade and interaction with its neighbors. This is not new to Iran, as the country has pursued a policy of improving relations with immediate neighbors including investments in increased energy interdependency. Yet the past rationale for regional policy was more focused on security considerations. This time, the rationale has been expanded to include trade and economic reasons. However, this strategy is facing challenges on multiple fronts, most importantly due to the existing tensions between Iran and her southern Arab region. In fact, deputy head of the Iran-China Chamber of Commerce Majid Reza Hariri recently criticized the strategy of focusing on immediate neighbors by highlighting the tensions and disagreements that Iran has with a number of immediate neighbors. Nonetheless, Tehran can benefit from closer trade and investment ties with some of its neighbors. The best case where the merger of security and economic rationales can be witnessed is in Iran-Iraq relations.

It is not an exaggeration to say that Iran-Iraq relations present the most significant regional axis in West Asia. One should always keep in mind that the two states fought an eight-year war in the 1980s under Saddam Hussein, but have managed to establish a unique relationship including expanding economic relations. In fact, in the first seven months of the current Iranian year (March 21-October 22, 2018), Iraq was the most important export market for non-crude Iranian exports with close to $6 billion of exports.

A recent visit by new Iraqi President Barham Salih to Tehran and his high-level meetings across the Iranian power structure was another reminder of the nature of this relationship and its significance for Iran. The two sides agreed to elevate annual trade volume from the current $12 to $20 billion, which would be a major boost — especially if it includes a major growth in Iranian exports to Iraq. The question is what opportunities and obstacles are in store for the planned expansion of trade relations.

Iraq and Iran not only share the longest respective border with any neighbor in both countries, but they also have substantial ethnic, cultural and religious ties. Furthermore, due to the existence of a number of security challenges in the region, the two states converge on a number of geopolitical and security interests. While the existence of vast hydrocarbon reserves could be a reason for competition, so far the energy sector has brought the two nations closer — particularly as Iran has large reserves of natural gas that Iraq needs for its electricity generation.