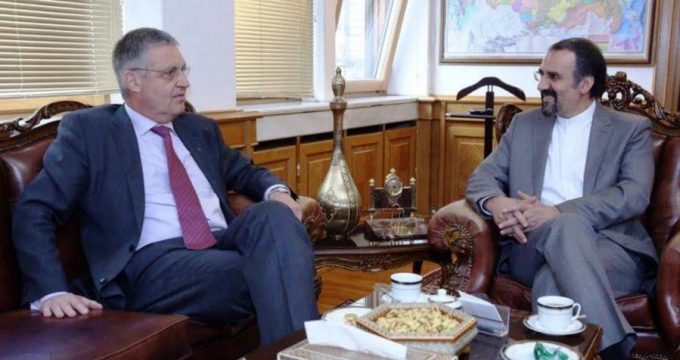 IRNA – European Union ambassador to Russia Markus Ederer has assured that the measures related to the establishment of financing mechanism with Iran would yield results.

Speaking to Iranian ambassador to Russia Mehdi Sanaee on Friday, Ederer added, ‘The European Union has repeatedly criticized the United States for getting out of the Nuclear Deal and for its unilateral acts.”

The two sides in the meeting discussed important matters in the relations between Iran and the European Union, including cooperation within the framework of Joint Comprehensive Plan of Action (JCPOA), implementation of financial mechanisms, the upcoming Summit of Ministers of Foreign Affairs of JCPOA, American sanctions, as well as regional developments.

The European Union ambassador to Russia had previously announced that a new mechanism for cooperation with Iran will be implemented in light of the fact that the United States imposed new sanctions against Iran.

The European Union ambassador in Moscow said that cooperation with Iran must support the financial payment channels with Iran to export its products, including oil and import European commodities.