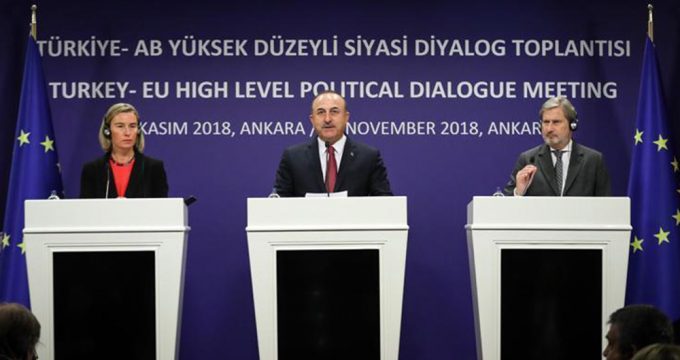 Turkey and the European Union stand together on the importance of Iran receiving economic benefits as the result of lifted sanctions, said Turkey’s foreign minister and visiting EU officials in the capital Ankara on Thursday.

“We agreed on the importance of sustaining the economic benefits” Iran has been enjoying since the lifting of sanctions following the 2015 nuclear deal, Mevlut Cavusoglu said in a joint statement with visiting EU foreign policy chief Federica Mogherini and Johannes Hahn, EU enlargement commissioner.

Iran signed the nuclear deal, also known as the Joint Comprehensive Plan of Action (JCPOA), in July 2015 with P5+1 countries — the U.S., the U.K., France, China, Russia plus Germany, and including the European Union.

Under the deal, the U.S. and other world powers agreed to lift some economic sanctions imposed on Iran in return for the latter agreeing to rein in its nuclear program.

Since then, Iran has enjoyed higher foreign investment into its domestic economy, freedom in the dollar-dominated international financial transactions, increasing oil production, and rising oil exports.

The 2015 pact placed unprecedented restrictions on Iran’s nuclear program in exchange for billions of dollars in relief from international sanctions, but Trump unilaterally withdrew the U.S. from the deal this May, claiming Iran was violating it.

All of the U.S.’ negotiating partners had agreed that maintaining the deal was the best way to reign in Iran’s program, and since Trump’s announcement, many have vowed to maintain trade ties with Iran despite the U.S. move and finding ways to get around U.S. restrictions.

The joint statement also expressed Turkey and the EU’s strong will to boost cooperation in fighting terrorism, adding that concrete steps have already been taken on this matter.

The statement also stressed greater cooperation with high-level dialogues in the fields of the economy, energy, and transportation.

“We will continue our preparations for the new meetings of the Partnership Council, the Counter-Terrorism Dialogue, Joint Security and Defense Policy consultations and thematic foreign policy dialogue,” it said.

It also underlined the importance of financial cooperation in Turkey’s adaptation to EU membership norms and standards in various areas.

* Jeyhun Aliyev contributed to this story from Ankara