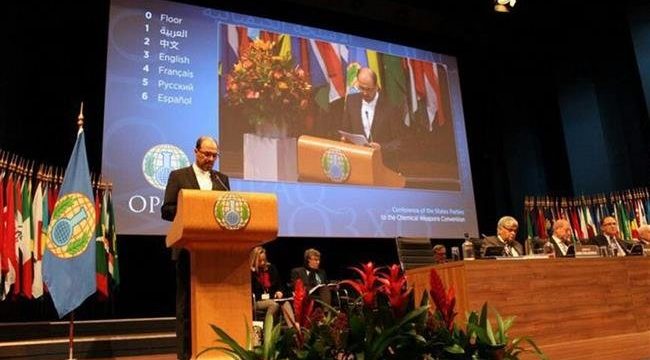 Press TV – Tehran says the American economic sanctions against Iran could hamper imports of medicine meant for victims of chemical attacks, despite Washington’s claims to the contrary.

Gholam-Hossein Dehqani, Iranian deputy foreign minister for legal and international affairs, made the remarks in an address to the Fourth Review Conference of the Chemical Weapons Convention (CWC) in The Hague on Wednesday.

He described Iran as the biggest victim of chemical weapons, denouncing the international community’s inaction regarding the use of chemical arms against both Iraqi and Iranian people by the regime of ex-Iraqi dictator Saddam Hussein during the eight-year war imposed on the Islamic Republic in the 1980s.

The official also complained that the “deceptive behavior” of some signatories to the CWC has paved the way for terrorist groups to get their hands on chemical weapons and use them against defenseless people.

Iran is a country that has always adopted a clear stance against weapons of mass destruction, including chemical arms, and honored its obligations, Dehqani said.

However, he added, the US, as the only possessor of a chemical weapons stockpile, has so far refused to annihilate the arsenal under the delusional pretext of technical problems.

Contrary to the CWC’s Article X, the US’s “addiction” to unilateral sanctions is a stumbling block to the peaceful use of chemical materials and technology.

The US’s banking restrictions against Iran could negatively affect medical services for victims of chemical weapons, and are in breach of Washington’s commitments under international law and the CWC.

Dehqani further warned that Israel’s refusal to sign up to the CWC and the Treaty on the Non-Proliferation of Nuclear Weapons (NPT) – which comes with Washington’s green light — has further complicated the situation in the Middle East and endangered the region’s peace and security.

Hundreds of thousands of Iranians were killed in the Iraqi-imposed war and many more were affected by the chemical weapons like mustard gas that were used by Saddam Hussein’s US-backed regime.

Many of those Iranians who were attacked by chemical weapons and are alive today continue to suffer the lingering aftereffects.

Reports says the US spy agency, CIA, knew about Iraq’s use of chemical weapons as early as 1983, but it took no action against the violations of international law, and even failed to alert the UN.

Iraq under Saddam is believed to have acquired the technology and the materials to develop chemical weapons from the US and a number of Western countries.

Dehqani’s comments came a few days after the US re-imposed a new set of bans targeting Iran’s banking and energy sectors. Those sanctions been lifted under a 2015 multilateral nuclear deal, which the US unilaterally scrapped in May.

Tehran says the target of such bans are the very people of Iran, rejecting Washington’s claims that its restrictive measures do not affect Iranian imports of humanitarian goods.

In a bid to ratchet up pressure on Tehran, the US appears to be preparing to level a new allegation against Iran, claiming that country is not abiding by the 1997 Chemical Weapons Convention, according to recent reports.