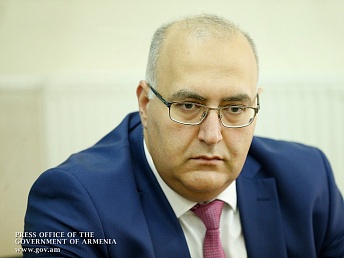 US sanctions will not affect Armenia’s ties with Iran

ARKA – The “toughest ever” sanctions unleashed by US against Iran will not affect Armenia’s long-term cooperation with Iran in the energy sector, according to Armenia’s acting Minister of Energy Infrastructures and Natural Resources Garegin Baghramyan.

Speaking at a news conference today he said a few days ago a team of U.S. officials, who arrived in Armenia to explain to the Armenian government and private sector the implications of economic sanctions reimposed against neighboring Iran, was told that in view of the blockade imposed on Armenia by Azerbaijan and Turkey, there is no other alternative to Yerevan except for Iran. He said Armenian officials recalled during the meeting that previous US sanctions against Iran had not affected the energy cooperation between Armenia and Iran.

Baghramyan stressed that energy cooperation with Iran is necessary for Armenia for preserving the energy balance in the power grid as well as to ensure the continuous operation of the Armenian nuclear power plant.

“The power transmission lines with Iran are very important to us, and the US realizes that Armenian-Iranian cooperation in energy will not cause problems,” he said.

The third high-voltage overhead 400 kV power transmission line with (funded by the Iranian government) is being built between Armenia and Iran. It is supposed to increase the capacity for electricity flows between the two countries threefold from the current 350 MW.

On Nov. 5, Washington reimposed sanctions on Tehran, targeting the country’s banks, airline, shipping firms and atomic energy agency, which had been lifted in 2016 after the signing of the Joint Comprehensive Plan of Action (JCPOA), the nuclear deal that was achieved in Vienna in 2015 after years of negotiations among Iran and the Group 5+1 (Russia, China, the US, Britain, France and Germany). In May 2018 US President Donald Trump announced the United State’s withdrawal from the agreement.

Garegin Baghramyan, Iran-Armenia ties, US sanctions against Iran November 21, 2018
Rouhani urges prevention of corruption, money laundering
Iran to call for removal of US medical bans at OPCW in Hague