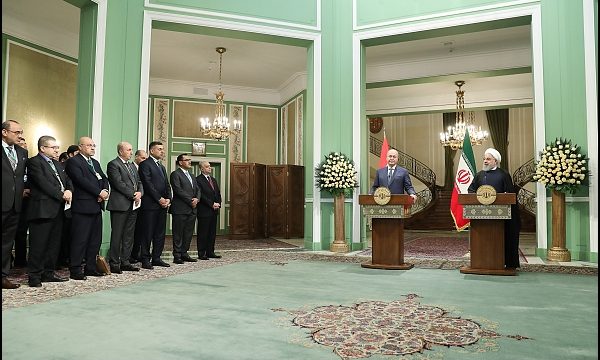 Weekly report: Iraqi president in Tehran with ‘clear message’ amid fresh US sanctions

President Hassan Rouhani on Sunday appreciated all those involved in relief works, temporary housing and reconstruction of damaged units in Kermanshah province, noting that helping the quake-stricken people was a national undertaking.

Iran, Germany discuss SPV
The foreign minister of Iran and his former German counterpart discussed a range of issues in Tehran, including a special purpose vehicle (SPV) that the European Union has developed to save the 2015 Iran nuclear deal and maintain trade with Iran.

The governor of Khuzestan Province on Monday rejected as false a recent report which claimed 22 individuals who were arrested over the September 22 terrorist attack in Ahvaz have been executed.

Iranian Foreign Minister Mohammad Javad Zarif in a message slammed US Secretary of State Mike Pompeo for his audacity to threaten ordinary Iranians.

Iran complying with JCPOA commitment despite US sanctions: IAEA

Iran has continued to implement all its commitments under the 2015 nuclear deal it signed with major global powers even as the United States re-imposed fresh sanctions against Tehran, a report by the International Atomic Energy Agency (IAEA) says.

Iranian Defense Minister Brigadier General Amir Hatami warned the enemies that any aerial military action against the country will draw such a crushing response that the perpetrators would regret it.

The Leader of the Islamic Revolution Ayatollah Khamenei received the Iranian medalists of the 2018 Asian Para Games today morning.

America has chosen the wrong path in sanctioning Iran and will be defeated, Iranian President Hassan Rouhani said Wednesday, according to the Tasnim news agency.

The Iranian deputy foreign minister for political affairs said on Thursday that dollar has turned into a weapons in the hand of the US to impose its illegitimate demands on European partners, challenging European states’ national sovereignty in practice.

Iraqi president was officially welcomed and greeted by his Iranian counterpart Hassan Rouani in Sa’adabad cultural and historical complex on Saturday.

Iranian President Rouhani said Sat. that the current economic transactions between Iran and Iraq stands at about $12 billion, which can be boosted to $20 billion with further cooperation.

Leader of the Islamic Revolution Ayatollah Seyyed Ali Khamenei has slammed foreign meddling in Iraq, saying the Arab country must stand firm against its enemies.

The US announced the re-imposition of sanctions against Tehran that were previously lifted under the JCPOA on 5 November. Prior to this date, Washington had warned the Belgium-based organization working with interbank transactions that it would also fall under sanctions if it continued to work with Iranian banks.

Iran’s defense minister said Tuesday the newly imposed sanctions on Iran would make the country more self-sufficient in the field of defense.

The second package of US sanctions, including restrictions targeting the country’s oil industry, came into force on November 5, which Washington insists will force all importers of Iranian oil to eventually reduce their imports to zero.

Earlier, the US Treasury announced that the Society for Worldwide Interbank Financial Telecommunication (SWIFT) would sever its links to several Iranian banks for the sake of the overall stability of the network. SWIFT did not say directly that it was cutting off Iranian banks due to the new US sanctions which entered force on November 5.

President: Iraq no instrument for wielding sanctions on Iran

Iraqi President Barham Salih in a meeting with his Iranian counterpart Hassan Rouhani underlined that Baghdad will never become a tool in the hands of the US to pressure Tehran through brutal sanctions.

US Treasury hits Hezbollah in Iraq with sanctions

The US Treasury expanded its attack on Hezbollah’s financial network on Tuesday, hitting key representatives of the Lebanese militant group in Iraq with sanctions.

Saudi Crown Prince Mohammed bin Salman attempted to persuade Israeli Prime Minister Benjamin Netanyahu to start a conflict with Hamas in Gaza as part of a plan to divert attention from the killing of journalist Jamal Khashoggi, sources inside Saudi Arabia have told Middle East Eye.

The CIA has found that Saudi Crown Prince Mohammad bin Salman ordered the assassination of Saudi journalist Jamal Khashoggi in Istanbul last month, directly contradicting claims to the contrary by the Saudi government, the Washington Post has reported.

The US senate has rejected an effort by Kentucky Senator Rand Paul to block a major arms sale to Bahrain – more proof that if there’s one thing that unites Democrats and Republicans, it’s selling weapons to Middle Eastern allies.

The UN General Assembly on Friday voted in overwhelming majority in favor of a draft resolution affirming Syria’s sovereignty over the occupied Golan and considering all Israeli occupation procedures in it null and void.

Holding the world tourism forum in the midwestern Iranian city of Hamedan makes it stick out in the world, and therefore, a regional office of the United Nations World Tourism Organization (UNWTO) will be opened in Tehran, a local official said.

Iran’s capital city of history and civilization, Hamedan, holds the UNWTO Affiliate Members Plenary Session on Monday to be the country’s tourism flagship in the world.

Iran’s minister of communication said that the country is considering the initiative introduced by France on cyber warfare.

The project of building football camps in Kish Island will start soon as a step to prepare the region for a probable co-hosting of 2022 Qatar World Cup, said sports director of Kish Free Zone Organization Bahram Afsharzadeh.