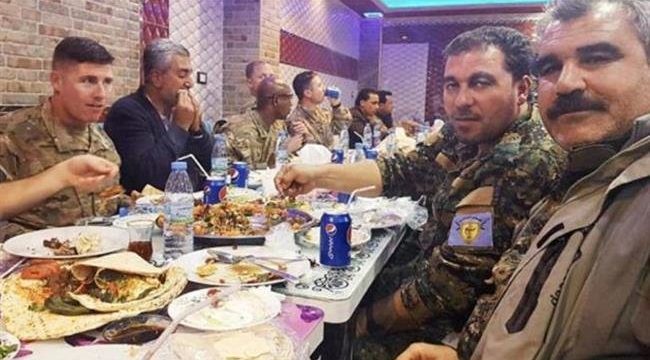 “These photos have found wide coverage in our media and disturbed our people. They tarnished the image of the US and its army… for the Turkish public,” he was quoted by the official Anatolia news agency as saying.

The pictures dated November 11 show American troops having a US Veterans Day dinner with members of the so-called People’s Protection Units (YPG) militant group in the city of Manbij in northern Syria.

The US has been arming and training Kurdish militants under the banner of helping them fight the Daesh terror group, but Syria and several other countries see ulterior motives behind the deployment.

The assistance peaked in April 2016, when the US support for Syria-based militants expanded to enlist hundreds of US special forces and teams.

Turkey, a key US ally in the region, has repeatedly questioned Washington’s deployment of heavy weapons in Syria despite the defeat of Daesh in much of the Arab country.

Turkey associates the YPG with anti-Ankara separatists, and has long been insisting that Washington stop the support.

“We expect US to stop cooperation with the YPG terror group as promised,” the Turkish defense chief said on Saturday.

Last year, Ankara said Washington had promised it through Defense Secretary James Mattis to take back weapons from Kurdish militants once the Takfiri group was routed.

“It is unacceptable for the US to provide arms and ammunition by plane and trucks to the YPG terrorist group even when Daesh has been neutralized to a large extent,” Akar said.

Syria and its allies pushed Daesh out of its last stronghold in the eastern province of Dayr al-Zawr early this year.

Last week, US point man on Syria James Jeffrey said Washington was laying the groundwork for a long-term commitment to eastern Syria that would include “stabilization” after Daesh’s defeat.

Jeffrey came up with a novel justification, saying US troops would not withdraw as long as “Iranian-commanded forces” were present in Syria.

Iran has been lending military advisory support to the Syrian military against militants and terrorists at Damascus’ request but the US has deployed troops against the will of the Syrian government and without a UN mandate.

General Hulusi Akar, US troops in Syria, YPg November 18, 2018
Russia may switch to settlements in national currencies with Iran – Novak
A Look at Iranian Newspaper Front Pages on November 18