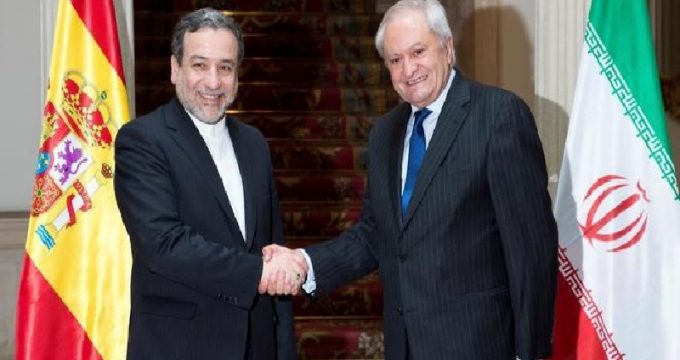 Araqchi in Spain to confer with officials

November 18, The Iran Project – On the third leg of his European tour, Iran’s Deputy Foreign Minister for Political Affairs Abbas Araqchi arrived in Madrid on Friday (Nov. 16) to take part in the second round of negotiations with his Spanish counterpart.

During a press conference in Madrid, Araqchi said before targeting Iran economy, US sanction had been against Europe sovereignty, security and validity.

After the implementation of Iran nuclear deal, also known as the Joint Comprehensive Plan of Action (JCPOA), the relations between Tehran and Madrid entered a new phase.

Over 3,000 Spanish firms establish long-term cooperation with Iran, he noted.

He pointed to the recent report released by the International Atomic Energy Agency (IAEA) verifying Iran commitment to the JCPOA for the 13th time, saying the US illogical withdrawal from the nuclear deal will make other countries not trust negotiations, diplomacy and the UNSC mechanisms

In a meeting with President of the Senate of Spain Pío García-Escudero, the Iranian diplomat said thanks to Iran nuclear deal, the volume of trade ties between Tehran and Madrid reached €2b last year.

García-Escudero, for his part, expressed condolences over the terrorist attack which happened earlier in south of Iran and slammed terrorist acts in general.

Spain is completely aware of the US cruel sanctions and also of Iranians’ problems, he stated.

He also asserted that the Spanish government and the EU support Iran nuclear deal and is aimed to minimize the effects of sanctions.

In a meeting with the Iranian deputy foreign minister, Spanish State Secretary of Foreign Affairs Fernando Valenzuela said Europe is determined to stand against US unilateral policy.

As long as Iran and the European Union preserve Iran deal, they will have the opportunity to find a solution for removing trade barriers, he added.

In an interview with Spanish ABC newspaper, Araqchi in response to a question on the impacts of the US exit from the JCPOA and its re-imposition of sanctions on Iran, said even before the new rounds of sanction took effect and since Donald Trump took office some foreign companies had begun to stop activities in Iran due to uncertainty and a psychological climate.

“Those companies not linked with the United States are continuing their cooperation with Iran. Around 3,000 small, medium-size and large companies are working with Iran. What they want is a financial channel for doing business,” he added.

he Iranian official said there is possibility of reduction in Iran’s oil sale but not to the extent that the US has claimed.

On 8 May, US President Donald Trump withdrew from the Joint Comprehensive Plan of Action (JCPOA), a landmark nuclear deal signed between Iran and six world powers – the US, the UK, France, China, Russia and Germany – in 2015.

Elevating his anti-Iran campaign, Trump proceeded to re-impose a set of harsh economic sanctions that targeted the Islamic Republic’s oil sales and various industries while threatening to punish European companies that traded with Tehran.